Variations on a Theme: Initializing Variables in Java

By: Barry A. Burd and
Updated: 10-11-2017
From The Book: Beginning Programming with Java For Dummies

Explore Book Buy On Amazon
You can choose to go for a variation on a theme. Let’s take a look at assigning values in Java. Here, it takes two lines to give the amount variable its first value:

You can do the same thing with just one line:

It helps to remember the difference between initializations and assignments. For one thing, you can drag a declaration with its initialization outside of a method:

You can’t do the same thing with assignment statements:

//This does not compile: 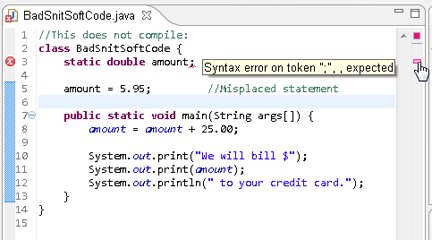 A failed attempt to compile BadSnitSoftCode.

This code has only one variable (as if variables are in short supply). You can get the same effect with several variables:

You can even add initializations to a combined declaration. When you do, each initialization applies to only one variable. For example, with the line

the value of shippingAndHandling becomes 25.00, but the variables flashDrivePrice and total get no particular value.

An online blog advises a $2 tip when a parking attendant fetches your car in a New York City garage. When the program runs, you type the garage's posted price for parking your car. The program tells you how much you'll pay after adding the $2 tip.