Programming with Java: Keeping Things Simple in Your Android App

By: Barry A. Burd and
Updated: 01-13-2017
From The Book: Java Programming for Android Developers For Dummies

Explore Book Buy On Amazon
The key to succeeding with Java programming is to keep it simple. Most programs operate entirely in the virtual realm. They have no bricks, nails, or girders. You can type a fairly complicated program in minutes. Even with no muscle and no heavy equipment, you can create a structure whose complexity rivals that of many complicated physical structures. You, the developer, have the power to build intricate, virtual bridges.

One goal of programming is to manage complexity. A good app isn't simply useful or visually appealing — a good app's code is nicely organized, easy to understand, and easy to modify.

Certain programming languages, like C++, support multiple inheritance, in which a class can have more than one parent class. For example, in C++ you can create a Book class, a TeachingMaterial class, and a Textbook class. You can make Textbook extend both Book and TeachingMaterial. This feature makes class hierarchies quite flexible, but it also makes those same hierarchies extremely complicated. You need tricky rules to decide how to inherit the move methods of both the computer's Mouse class and the rodent's Mouse class.

To avoid all this complexity, Java doesn't support multiple inheritance. In Java, each class has one (and only one) superclass. A class can have any number of subclasses. You can (and will) create many subclasses of Android's AppCompatActivity class. And other developers create their own subclasses of Android's AppCompatActivity class. But classes don't have multiple personalities. A Java class can have only one parent. The Executive class cannot extend both the FullTimeEmployee class and the PartTimeEmployee class.

The relationship between a class and its subclass is one of inheritance. In many real-life families, a child inherits assets from a parent. That's the way it works.

But consider the relationship between an editor and an author. The editor says, “By signing this contract, you agree to submit a completed manuscript by the fifteenth of August.” Despite any excuses that the author gives before the deadline date, the relationship between the editor and the author is one of obligation. The author agrees to take on certain responsibilities; and, in order to continue being an author, the author must fulfill those responsibilities. (By the way, there's no subtext in this paragraph — none at all.)

Now consider Barry Burd. Who? Barry Burd — that guy who writes Java Programming for Android Developers For Dummies, 2nd Edition, and certain other For Dummies books (all from Wiley Publishing). He's a college professor, and he's also an author. You want to mirror this situation in a Java program, but Java doesn't support multiple inheritance. You can't make Barry extend both a Professor class and an Author class at the same time.

Here's another example. Though a company might hire consultants, consultants who work for the company aren't employees. Consultants are normally self-employed. They show up temporarily to help companies solve problems and then leave the companies to work elsewhere. In the United States, differentiating between an employee and a consultant is important: So serious are the U.S. tax withholding laws that labeling a consultant an “employee” of any kind would subject the company to considerable legal risk.

To include consultants with employees in your code, you need a Consultant class that’s separate from your existing Employee class hierarchy. On the other hand, consultants have a lot in common with a company's regular employees. For example, every consultant has a getPayString method. You want to represent this commonality in your code, so you create an interface. The interface obligates a class to give meaning to the method name getPayString. package com.allyourcode.company;

The next two sections of code implement the Payable interface and provide bodies for the getPayString method. package com.allyourcode.company;

@Override public String getPayString() { return name + ", Pay not known\n"; } } Both the Consultant and Employee classes implement the Payable interface — the interface that summarizes what it means to be paid by the company. With this in mind, consider this code: package com.allyourcode.a10_10; 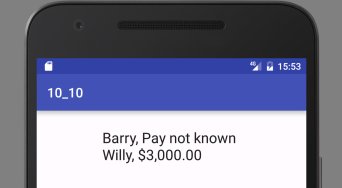 Paying an employee and a consultant.

An interface cuts across the class hierarchy.

The dotted line isn't part of standard UML. The folks who manage the standard have much better ways to represent interfaces.