By: Barry Burd and
Updated: 01-13-2022
From The Book: Beginning Programming with Java For Dummies

Explore Book Buy On Amazon
You will probably find times when programming with Java that you need to display a window on your computer screen. This code has very little logic of its own. Instead, this code pulls together a bunch of classes from the Java API. 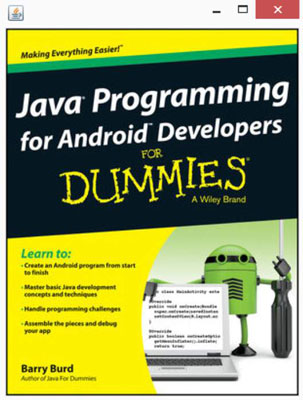 You can create an instance of the Purchase class with the line So in the code, you can do the same kind of thing. You can create instances of the JFrame, ImageIcon, and JLabel classes with the following lines: Here’s some gossip about each of these lines: If you read the previous bullets, you may get a false impression. The wording may suggest that the use of each component (JFrame, ImageIcon, JLabel, and so on) is a logical extension of what you already know. “Where do you put an ImageIcon?

Well of course, you put it on a JLabel.” When you’ve worked long and hard with Java’s Swing components, all these things become natural to you. But until then, you look everything up in Java's API documentation.

You never need to memorize the names or features of Java’s API classes. Instead, you keep Java’s API documentation handy. When you need to know about a class, you look it up in the documentation. If you need a certain class often enough, you’ll remember its features. For classes that you don’t use often, you always have the docs.