By: Barry A. Burd and
Updated: 01-10-2017
From The Book: Java Programming for Android Developers For Dummies

Explore Book Buy On Amazon
A bare-bones Android project contains over 1,000 files in nearly 500 folders. That's a lot of stuff. If you expand some of the branches in Android Studio's Project tool window, you see the tree shown. 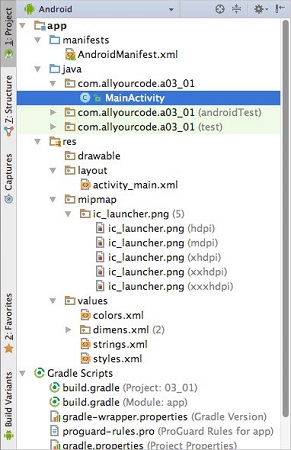 The Project tool window displays some parts of an Android app.

For many examples, you can forget about 99 percent of the stuff in the Project tool window. You can focus on only a few of its branches.

The word res stands for resources. The res branch contains extra items — items that your app uses other than its own Java code:

The term mipmap stands for multum in parvo mapping. And the Latin phrase multum in parvo means “much in little.” A mipmap image contains copies of textures for many different screen resolutions.

Gradle is a software tool. When the tool runs, it takes a whole bunch of files and combines them to form a complete application — a single file that you can post on Google Play. Of course, Gradle can combine files in many different ways, so to get Gradle to do things properly, someone has to provide it with a script of some kind. The heart of that script is in the build.gradle (Module: app) branch of the Project tool window. That branch describes your app's version number, minimum SDK, and other goodies.