How to Shape a Solid Table in HTML5

For this table-construction exercise, you’re going to draw some data from the hard-working economists and statisticians at the U.S. Bureau of Labor Statistics. On the website, scroll down to Table B-9: Indexes of Aggregate Weekly Hours and Payroll, shown in this figure. (The figure no-doubt shows teeny-tiny type, but it should nonetheless give you some idea of what you’re looking for.) 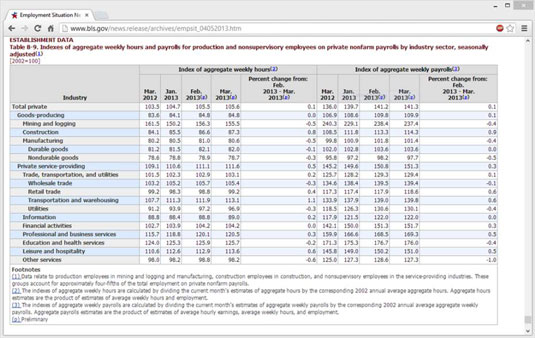 As you examine Table B-9, here’s what you see:

Here is how you build such a table by the numbers, as it were:

By using these techniques, you can create a solid, attractive table for presenting numerical and textual data. If you take your time and think your way through what you want your users to see, you can build a preliminary structure in HTML. Then you can start arranging cells and tweaking them until you get them just right.