What is Functional Programming?

Explore Book Buy On Amazon
Functional programming has somewhat different goals and approaches than other paradigms use. Goals define what the functional programming paradigm is trying to do in forging the approaches used by languages that support it. However, the goals don’t specify a particular implementation; doing that is within the purview of the individual languages. 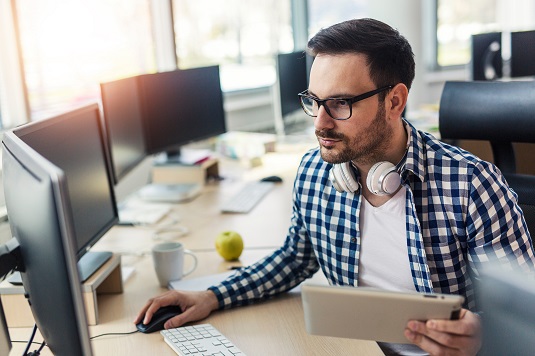 Of course, with MATLAB, you get a user interface, which reduces the learning curve. However, you pay for the convenience of the user interface with a loss of power and flexibility, which functional languages do offer. Using this approach to defining a problem relies on the declarative programming style, which you see used with other paradigms and languages, such as Structured Query Language (SQL) for database management.

In contrast to other paradigms, the functional programming paradigm doesn’t maintain state. The use of state enables you to track values between function calls. Other paradigms use state to produce variant results based on environment, such as determining the number of existing objects and doing something different when the number of objects is zero. As a result, calling a functional program function always produces the same result given a particular set of inputs, thereby making functional programs more predictable than those that support state.

Understanding the goals of functional programming

Imperative programming, the kind of programming that most developers have done until now, is akin to an assembly line, where data moves through a series of steps in a specific order to produce a particular result. The process is fixed and rigid, and the person implementing the process must build a new assembly line every time an application requires a new result. Object-oriented programming (OOP) simply modularizes and hides the steps, but the underlying paradigm is the same. Even with modularization, OOP often doesn’t allow rearrangement of the object code in unanticipated ways because of the underlying interdependencies of the code.

Functional programming gets rid of the interdependencies by replacing procedures with pure functions, which requires the use of immutable state. Consequently, the assembly line no longer exists; an application can manipulate data using the same methodologies used in pure math. The seeming restriction of immutable state provides the means to allow anyone who understands the math of a situation to also create an application to perform the math.

Using pure functions creates a flexible environment in which code order depends on the underlying math. That math models a real-world environment, and as our understanding of that environment changes and evolves, the math model and functional code can change with it — without the usual problems of brittleness that cause imperative code to fail. Modifying functional code is faster and less error prone because the person implementing the change must understand only the math and doesn’t need to know how the underlying code works. In addition, learning how to create functional code can be faster as long as the person understands the math model and its relationship to the real world.

Functional programming also embraces a number of unique coding approaches, such as the capability to pass a function to another function as input. This capability enables you to change application behavior in a predictable manner that isn’t possible using other programming paradigms.

Many developers have come to see the benefits of functional programming. However, they also don’t want to give up the benefits of their existing language, so they use a language that mixes functional features with one of the other programming paradigms. For example, you can find functional programming features in languages such as C++, C#, and Java. When working with an impure language, you need to exercise care because your code won’t work in a purely functional manner, and the features that you might think will work in one way actually work in another. For example, you can't pass a function to another function in some languages.