A subnet is a network that falls within a Class A, B, or C network. Subnets are created by using one or more of the Class A, B, or C host bits to extend the network ID. Thus, instead of the standard 8-, 16-, or 24-bit network ID, subnets can have network IDs of any length.

The illustration below shows an example of a network before and after subnetting has been applied. In the unsubnetted network, the network has been assigned the Class B address 144.28.0.0. All the devices on this network must share the same broadcast domain. 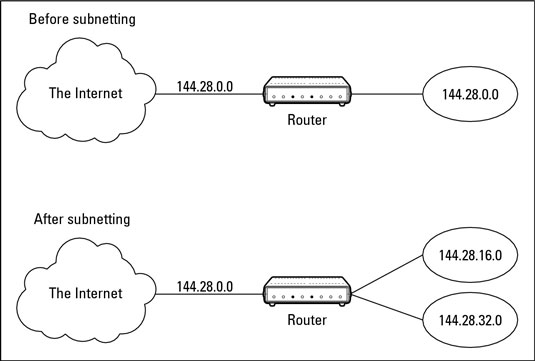 In the second network, the first four bits of the host ID are used to divide the network into two small networks, identified as subnets 16 and 32. To the outside world (that is, on the other side of the router), these two networks still appear to be a single network identified as 144.28.0.0.