Where to Find Bioinformatics Data

By: Jean-Michel Claverie and Cedric Notredame and
Updated: 03-26-2016
From The Book: Bioinformatics For Dummies 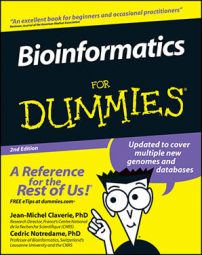 Bioinformatics combines information technology and molecular biology, so it makes sense that the Internet is the main arena for pursuing bioinformatics information. The following list offers links to helpful Web sites around the world and the areas that they specialize in:

Jean-Michel Claverie is Professor of Medical Bioinformatics at the School of Medicine of the Université de la Méditerranée, and a consultant in genomics and bioinformatics. He is the founder and current head of the Structural & Genomic Information Laboratory, located in Marseilles, a sunny city on the Mediterranean coast of France. Using science as a pretext to travel, Jean-Michel has held positions in Paris (France), Sherbrooke (PQ, Canada), the Salk Institute (La Jolla, CA), the Pasteur Institute (Paris), Incyte pharmaceutical (Palo Alto, CA); and the National Center for Biotechnology Information (Bethesda, MD). He has used computers in biology since the early days –– his Ph.D. work involved modeling biochemical reactions by programming an 8K Honeywell 516 computer right from the console switches! Although he has no clear recollection of it, he has been credited with introducing the French word “bioinformatique” in the late eighties, before involuntarily coining the catchy “bioinformatics” by mistranslating it while giving a talk in English!
Jean-Michel’s current research interests are in microbial and structural genomics, and in the development of bioinformatic methods for the prediction of gene function. He is the author or coauthor of more than 150 scientific publications, and a member of numerous international review panels and scientific councils. In his spare time, he enjoys the relaxed pace of life in Marseilles, with his wife Chantal and their two sons, Nicholas and Raphael.

Cedric Notredame is a researcher at the French National Centre for Scientific Research. Cedric has used and abused the facilities offered by science to wander around Europe. After a Ph.D. at EMBL (Heidelberg, Germany) and at the European Bioinformatics Institute (Cambridge, UK) under the supervision of Des Higgins (yes, the ClustalW guy), Cedric did a post-doc at the National Institute of Medical Research (London, UK), in the lab of Willie Taylor and under the supervision of Jaap Heringa. He then did a post-doc in Lausanne (Switzerland) with Phillip Bucher, and remained involved with the Swiss Institute of Bioinformatics for several years. Having had his share of rain, snow, and wind, Cedric has finally settled in Marseilles, where the sun and the sea are simply warmer than any other place he has lived in.
Cedric dedicates most of his research to the multiple sequence alignment problem and its many applications in biology. His friends claim that his entire life (past, present, future) is somehow stuffed into the T-Coffee multiple-sequence alignment package. When he is not busy dismantling T-Coffee and brewing new sequences, Cedric enjoys life in the company of his wife, Marita.