By: Bernard Golden and
Updated: 03-26-2016
From The Book: Virtualization For Dummies 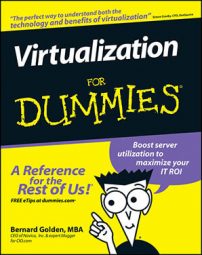 To help you get a better understanding and expand your knowledge of virtualization, get to know these useful terms and how they apply to virtualization and its process:

Bare metal: Virtualized servers in which the virtualization software is installed directly on the machine rather than on an operating system. Because it installs on the machine, it is said to reside on “bare metal.”

P2V: Shorthand for “physical to virtual.” P2V stands for the process of migrating systems from the physical hardware they originally ran on to virtual operating environments running in a virtualized environment.

Bernard Golden has been called “a renowned open source expert” (IT Business Edge) and “an open source guru” (SearchCRM.com) and is regularly featured in magazines like Computerworld, InformationWeek, and Inc. His blog “The Open Source” is one of the most popular features of CIO Magazine’s Web site. Bernard is a frequent speaker at industry conferences like LinuxWorld, the Open Source Business Conference, and the Red Hat Summit. He is the author of Succeeding with Open Source, (Addison-Wesley, 2005, published in four languages), which is used in over a dozen university open source programs throughout the world. Bernard is the CEO of Navica, a Silicon Valley IT management consulting firm.