By: Ulrika Jägare and
Updated: 06-29-2019
From The Book: Data Science Strategy For Dummies

Explore Book Buy On Amazon
In the past couple of years, an avalanche of different data science careers and roles have overwhelmed the market, and for someone who has little or no experience in the field, it’s hard to get a general understanding of how these roles differ and which core skills are actually required. The fact is that these different data science careers and roles are often given different titles, but tend to refer to the same or similar jobs — admittedly, sometimes with overlapping responsibilities. This crazy-quilt of job titles and job responsibilities is yet another area in data science that is in need of more standardization. 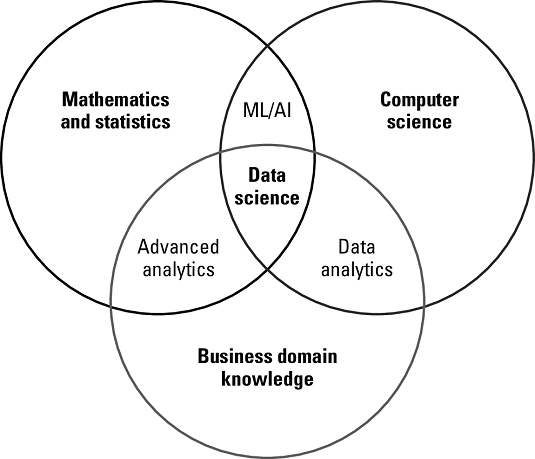 The image above shows the easy part because there's general agreement on which competencies are required for a successful and efficient data science careers — though you still need to define the roles and areas of responsibility for each team member. The definitions of data science careers that you find here aim to give you a general understanding of the most important roles you’ll need on your data science team. Just remember that variants may apply, depending on your own specific setup and strategic focus.

In general terms, a data scientist produces mathematical models for the purposes of prediction. And, because the development and interpretation of mathematical models requires deep technical knowledge, most data scientists have graduate level training in computer science, mathematics, or statistics. Data scientists also need strong programming skills in order to effectively leverage the range of available software tools. Aside from being technically savvy, data scientists need critical thinking skills, based on common sense as well as on a thorough understanding of a company's business objectives in order to produce high quality models.

Within the role of the data scientist, you'll find another, more traditional role hidden away: the statistician. In historical terms, the statistician was the leader when it came to data and the insights it could provide. Although often forgotten or replaced by fancier-sounding job titles, the statistician role represents what the data science field stands for: getting useful insights from data. With their strong background in statistical theories and methodologies, and a logically oriented mindset, statisticians harvest the data and turn it into information and knowledge. They can handle all sorts of data. What’s more, thanks to the quantitative background, modern statisticians are often able to quickly master new technologies and use these to boost their intellectual capacities. A statistician brings to the table the magic of mathematics with insights that have the ability to radically transform businesses.

If you’re dealing with small data sets, data engineering essentially consists of entering some numbers into a spreadsheet. When you operate at a more impressive scale, data engineering becomes a sophisticated discipline in its own right. Someone on your team looking for a data science career will need to take responsibility for dealing with the tricky engineering aspects of delivering data that the rest of your staff can work with.

Data engineers don’t need to know anything about machine learning (ML) or statistics to be successful. They don’t even need to be inside the core data science team, but could be part of a larger, separate data engineering team that supplies data to all data science teams. However, you should never place your data engineers and data scientists too far apart from one other organizationally. If these roles are separated into different organizations, with potentially different priorities, this could heavily impact the data science team productivity. Data science methods are quite experimental and iterative in nature, which means that it must be possible to continuously modify data sets as the analysis and algorithm development progress. For that to happen, data scientists need to be able to rely on a prompt response from the data engineers if trouble arises. Without that rapid response, you run the risk of slowing down a data science team's productivity.

Data scientists build mathematical models, and data engineers make data available to data scientists as the “raw material” from which mathematical models are derived. To complete the picture, these models must first be deployed (put into operation, in other words), and, second, they must be able to act on the insights gained from data analysis in order to produce business value. This task is the purview of the machine learning engineer.

Data architects define how the data will be stored, consumed, protected, integrated, and managed by different data entities and IT systems, as well as any applications using or processing that data in some way. A data architect usually isn’t a permanent member of a single data science team, but rather serves several data science teams, working closely with each team to ensure efficiency and high productivity.

It takes a lot of conversations to make data science work. Data scientists can't do it on their own. Success in data science requires a multiskilled project team with data scientists and domain experts working closely together. The domain expert brings the technical understanding of her area of expertise, sometimes combined with a thorough business understanding of that area as well. It usually includes familiarity with the basics of data analysis, which means that domain experts can support many roles on the data science team. However, the domain expert usually isn’t a permanent member of a data science team; more often than not, that person is brought in for specific tasks, like validating data or providing analysis or insight from an expert perspective. Sometimes the domain expert is allocated for longer periods to a certain team, depending on the task and focus. Sometimes one or several domain experts are assigned to support multiple teams at the same time.

The focus should be on finding someone with the ability to solve the specific problems your company is focusing on — or, to be even more specific, what your own data science team is focusing on. It’s not about hiring the perfect data scientist and hoping that they’re going to do all the things that you need done, now and in the future. Instead, it’s better to hire someone with the specific skills needed to meet the clearly defined organizational objectives you know of today.

For instance, think about whether your need is more related to ad hoc data analysis or product development. Companies that have a greater need for ad hoc data insights should look for data scientists with a flexible and experimental approach and an ability to communicate well with the business side of the organization. On the other hand, if product development is more important in relation to the problems you’re trying to solve, you should look for strong software engineering skills, with a firm base in the engineering process in combination with their analytical skills.

If you're hoping to find a handy checklist of all the critical skills that you should be looking for when hiring a data scientist, you'll be sorely disappointed. The fact is, not even a basic description of important traits the role should possess is agreed on across the industry. There are many opinions and ideas about it, but again the lack of standardization is troublesome.

So, what makes coming up with a simple checklist of the needed tool sets, competencies, and technical skills required so difficult? For one, data science careers are evolving fast, and tools and techniques that were important to master last year might be less important this year. Therefore, staying in tune with the evolution of the field and continually learning new methods, tools, and techniques is the key in this space.

Another reason it’s difficult to specify a concrete checklist of skills is because the critical skill sets needed are actually outside the data science area — they qualify more as soft skills, like interpersonal communication and projecting the right attitude. Just look at the data scientist Venn diagram of skills, traits, and attitude needed. The variety of skill sets and mindset traits that a perfect data scientist must master is almost ridiculous. 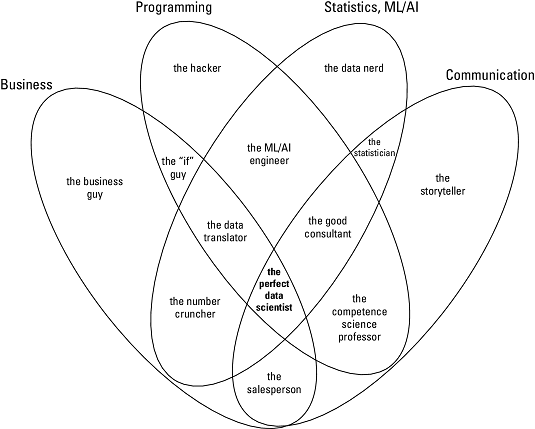 So, bearing in mind that specifying competencies needed for a data scientist is more a question of attitude and mindset in combination with a certain skill set, here’s a list of characteristics that define a good data scientist:

Of course, there are additional skills of interest, such as in statistics, machine learning, and programming, but remember that you do not need one person to fit all categories here. First of all, you should be looking for data scientists who possess the most important skills that meet your needs. However, in the search for that top-notch data scientist, remember that the list above could also be used for hiring a complementary team of data scientists which together possess the skills and mindset needed.

After your team of data scientists is in place, encourage their professional development and lifelong learning. Many data scientists have an academic mindset and a willingness to experiment, but in the pursuit of a perfect solution, they sometimes get lost among all the data and the problems they’re trying to solve. Therefore, it’s important that they stay connected with the team, though you should allow enough independence so that they can continue to publish white papers, contribute to open source, or pursue other meaningful activities in their field.