A histogram is a graph that represents the probability distribution of a dataset. A histogram has a series of vertical bars where each bar represents a single value or a range of values for a variable. The heights of the bars indicate the frequencies or probabilities for the different values or ranges of values.

For example, this figure shows a histogram of the daily prices of Apple stock from January 1, 2013 to December 31, 2013. 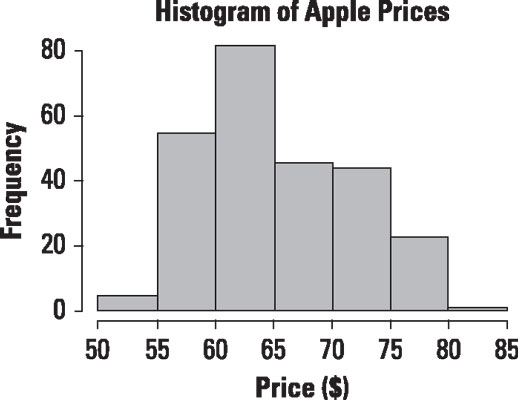 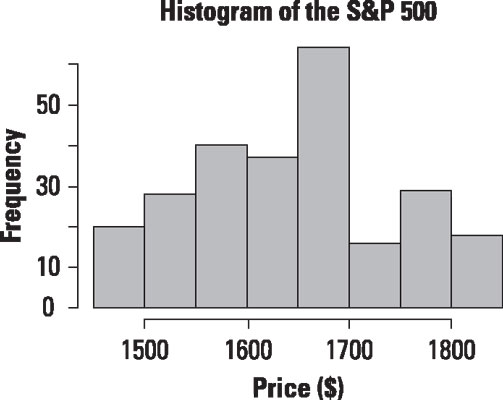 Histogram of daily prices for the S&P 500.

According to the histogram in Figure 12-10, the most frequently observed range of prices during the year was between $1,650 and $1,700. The mean turned out to be $1,643.80, and the median was $1,650.41. Unlike Apple stock, the mean was below the median; the distribution of prices for 2013 is negatively skewed. This indicates that there was a slightly greater tendency for the Standard and Poor's 500 to trade below the mean than above the mean in 2013.

One of the most important uses of histograms is to determine if a dataset follows a specified probability distribution. Although there are many formal statistical tests to determine which probability distribution a dataset follows, it's good practice to visually inspect the data with a graph before engaging in any formal statistical tests.

The histogram of Apple prices provides strong evidence that Apple stock prices are not normally distributed. The normal distribution is symmetrical about its mean, whereas the Apple stock prices are positively skewed. The histogram of S&P prices provides strong evidence that the S&P 500 is also unlikely to be normally distributed because its distribution is negatively skewed.