How to Use FaceTime on Your iPad

The FaceTime app works with the cameras built into the iPad (iPad 2 or later) and lets you call other folks who have a device that supports FaceTime. You can use FaceTime to chat while sharing video images with another person. This preinstalled app is useful for people who want to keep up with distant family members and friends and to see (as well as hear) the latest-and-greatest news.

You can make and receive calls with FaceTime by using a phone number (iPhone 4 or later) or an e-mail account (iPad 2 or later, iPod touch, or Mac) and show the person on the other end what's going on around you. Just remember that you can't adjust audio volume from within the app or record a video call. Nevertheless, on the positive side, even though its features are limited, this app is easy to use.

Before you can use FaceTime, make sure that the FaceTime feature is turned on. Tap Settings on the Home screen; tap FaceTime; and then tap the On/Off button to turn the feature on, if necessary. On this Settings page, you can also select the e-mail and phone account that others can use to call you.

Make a FaceTime call with wi-fi or 3G/4G

If you know that the person you're calling has FaceTime on an iPhone 4 or later, an iPad 2 or later, a fourth-generation or later iPod touch, or a Mac running OS X 10.6.6 or later, first be sure that you've added that person to your iPad Contacts before you call them. Then, follow the following steps.

You can also simply go to the Contacts app, find a contact, tap the FaceTime icon in that person's record, and then tap the phone number or e-mail address in the pop-up that appears to make a FaceTime call. You can also view recent calls by tapping the Recents button in Step 1, above. Tap a recent call to call that person back.

New with iOS 7 you can make audio only FaceTime calls which cuts down on the data streaming that can cost you when you share video. In Step 4 above simply tap the Call button (shaped like a phone handset) instead of the FaceTime button to initiate your audio only call.

How to accept or end a FaceTime call

If you're on the receiving end of a FaceTime call, accepting the call is about as easy as it gets. When the call comes in, tap the Accept button to take the call, or tap the Decline button to reject it. Once you accept the call, you can chat away with your friend, tapping the FaceTime button if you want to view video images. To end the call, tap the big End button.

To mute sound during a call, tap the Mute button, which looks like a microphone with a line through it (see the following figure). Tap the button again to unmute your iPad.

To add a caller to your Favorites list, with FaceTime open, tap the Favorites button, tap the plus sign (+), and select a name from the Contacts list. Then you can locate the person you want to call by tapping Favorites and choosing that person from a short list rather than scrolling through all your contacts.

If you'd rather not be available for calls, tap Settings→Do Not Disturb. This feature stops any incoming calls or notifications. After you turn on Do Not Disturb, you can schedule when it's active, allow calls from certain people, or accept a second call from the same person after a three-minute interval by using the Do Not Disturb Repeated Calls setting.

How to switch views in FaceTime

When you're on a FaceTime call, you may want to use the iPad's built-in camera to show the person you're talking to what's going on around you. Tap the Switch Camera button to switch from the front-facing camera that's displaying your image to the back-facing camera that captures whatever you're looking at (see the following figure). 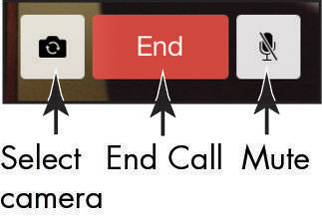 Tap the Switch Camera button again to switch back to the front camera, which displays your image.