How to Read Resistor Values

If you think those colorful bands on your resistors are there just for show, think again! Those bands tell you the value of the resistor. Before you can decode the resistor value, you need to know a little more about resistors.

There are two main types of resistors: 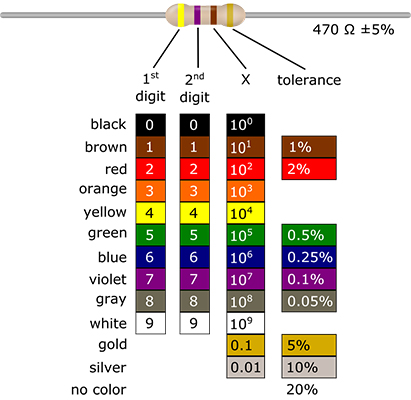 Decoding the nominal value of a resistor

Here's how you use the color code to figure out the nominal value of the resistor (refer to the figure):

To figure out how far off from the nominal value the actual resistance could be, you look at the fourth band on a standard resistor (or the fifth band on a precision resistor). Refer to the preceding figure for the color code for the tolerance of a resistor.

Say that the fourth band of the 470 Omega resistor you have chosen for a particular project is gold. The color, gold, in the column labeled "tolerance" in the figure represents a tolerance of 5 percent. Because 5 percent of 470 is 23.5, the actual resistance could be as much as 23.5 Omega higher or lower than 470 Omega. So the actual value of the resistance could be any value from 446.5 to 493.5 Ω.

The following figure shows you two more examples of resistors and their values.