How to Create a Combination Circuit

Most electronic circuits are combinations of series and parallel connections. How you arrange components in a circuit depends on what you're trying to do. Take a look at the series-parallel circuit shown here.

By opening and closing switches in this series-parallel circuit, you can direct the supply current through different paths.

Note the three parallel branches, each containing a switch in series with a resistor and an LED. The switches are represented by the symbols at the top of each branch.

If only one switch is in a closed position, as shown in the following figure, all the supply current flows through just one LED, which lights, and the other LEDs are off. 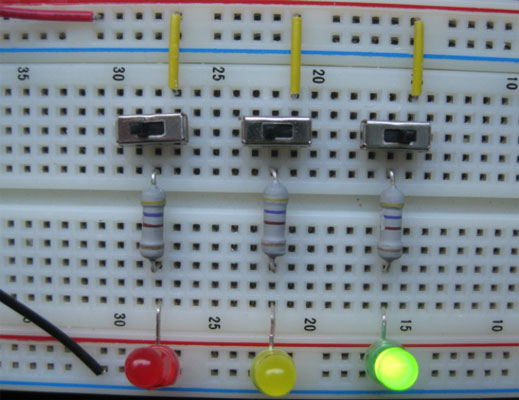 By turning just the rightmost switch on, only the green LED receives current.

By alternating which switch is open at any time, you can control which LED is lit. You can imagine such a circuit controlling the operation of a three-stage traffic light (with additional parts to control the timing and sequencing of the switching action).

To analyze combination circuits, you apply voltage and current rules one step at a time, using series rules for components in series and parallel rules for components in parallel. At this point, you don't quite have enough information to calculate all the currents and voltages in the LED circuits shown here. You need to know about a rule called Ohm's Law and about how voltage is dropped across diodes. Then you'll have everything you need to analyze simple circuits.

To build the three-LED circuit described here, you need the following parts:

Each SPDT switch has three terminals for making connections, but for the three-LED circuit, you need to use only two of the terminals. (See the following figure.) The slider button controls which end terminal gets connected to the center terminal. 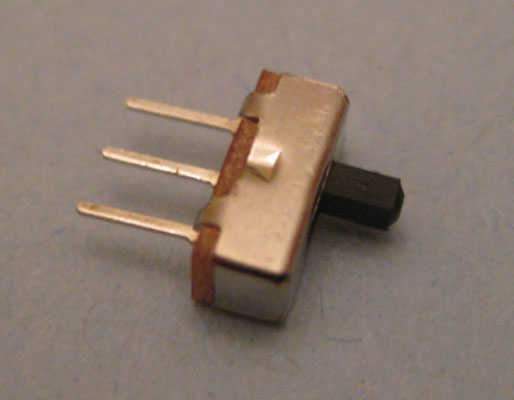 An SPDT switch can be used as an on/off switch by connecting just two of its three terminals in your circuit. 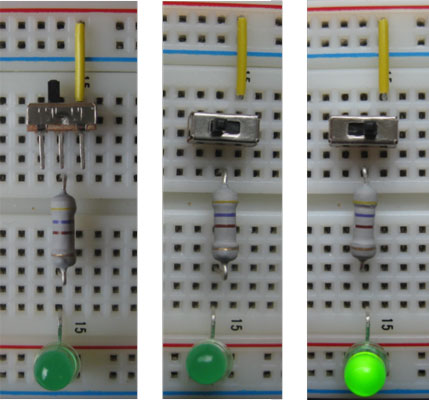 Using an SPDT switch as an on/off switch.

The simplest type of on/off switch is a two-terminal, single-pole, single-throw (SPST) switch, which simply connects or disconnects the two terminals when you move the slider. But it's hard to find such a switch with terminals designed to fit into solderless breadboards.