How to Use Social Media to Meet Drone Enthusiasts

Heard of Facebook? Then you likely have a general idea of what social media is. It’s a great place to meet other drone enthusiasts and experts, doesn’t it? Social media isn’t just for people; it is also for brands. Sometimes companies will interact with their customers and supporters more so on social media because of the residual impact it can have on brand awareness through the increased public chatter.

Whether you want to connect with people or companies, there are endless numbers of social networks all over the globe to help you. If you don’t already have a social network of choice, here are a few to consider:

When you search for drone groups on social media, try narrowing your focus to include more geographically specific group searches. For example, a quick search on Facebook for Washington DC Drones serves up the D.C. area Drone group. Finding a local group is a great way to get connected with drone users in your area.

Meetup.com is a new social network that is designed to help people get together in real life. That’s right, flesh and blood interaction is being aided by digital technology! Meetups.com is a great place to get plugged in with other drone flyers so that you can get out there and start flying.

Check out the homepage for the Indianapolis drone flyers group. Residents of Indianapolis and nearby can join the group to interact with others online and get notified of events for the group. 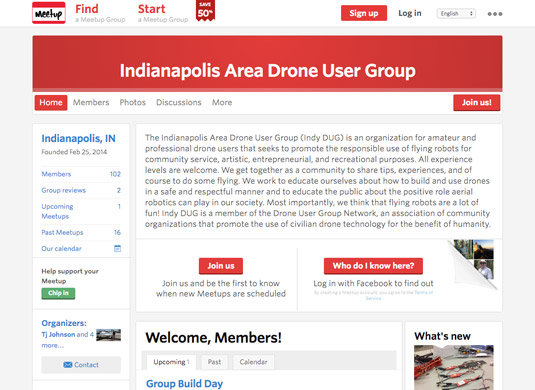 The great thing about Meetup.com is that they require you to commit to meeting in person. This is great for motivating people to get out there and socialize!

What doesn’t Google do? Years ago, when smartphones exploded in popularity, people joked about how there was always “an app for that.” Or maybe, there is a Google tool for that.

Google Groups was designed to give people the opportunity to create their own discussion forum on specific topics. Google Groups allow you to get your own forum up and running with little technical knowhow. One great Google Groups feature is that users don’t have to log in through a computer to access their group. Users can stay connected and correspond by email, meaning they never have to log into the Google Groups website. This is a great way to stay plugged in without ever having to log on! 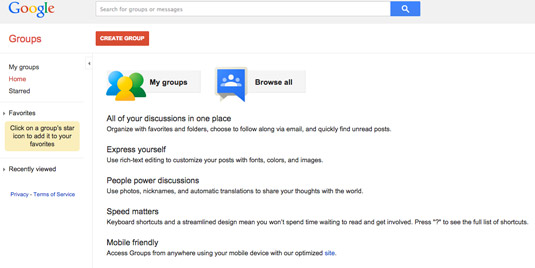