What You Need to Know about Email Hacking: Email Bombs

Explore Book Buy On Amazon
Every system you have in place can be subject to hacking. This includes email hacking, such as email bombs. Email bombs attack by creating denial of service (DoS) conditions against your email software and even your network and Internet connections by taking up a large amount of bandwidth and sometimes requiring large amounts of storage space. Email bombs can crash a server and provide unauthorized administrator access — yes, even with today’s seemingly endless storage capacities.

An attacker can perform an email hack by creating an attachment-overload attack by sending hundreds or thousands of emails with very large attachments to one or more recipients on your network.

Attachment attacks have a couple of goals:

Contrary to popular belief and use, the email system should not be an information repository, but that’s exactly what email has evolved into. An email server used for this purpose can create unnecessary legal and regulatory risks and can turn into a huge nightmare if your business receives an e-discovery request related to a lawsuit. An important part of your security program is developing an information classification and retention program to help with records management. But don’t go it alone. Get others such as your lawyer, human resources manager, and chief information officer involved. This practice can help ensure that the right people are on board and that your business doesn’t get into trouble for holding too many — or too few — electronic records in the event of a lawsuit or investigation.

A hacker can send a huge number of emails simultaneously to hack your email system. Malware that’s present on your network can do the same thing from inside your network if your network has an open Simple Mail Transfer Protocol (SMTP) relay (which is often the case). These connection attacks can cause the server to give up on servicing any inbound or outbound Transmission Control Protocol (TCP) requests. This situation can lead to a server lockup or a crash, often resulting in a condition in which the attacker is allowed administrator or root access to the system.

An email hack using a flood of emails is often carried out in spam attacks and other DoS attacks.

Prevent email hacks as far out on your network perimeter as you can, ideally in the cloud. The more traffic or malicious behavior you keep off your email servers and clients, the better.

Many email servers allow you to limit the number of resources used for inbound connections, as shown in the Maximum Number of Simultaneous Threads setting for the IceWarp email server. This setting is called different things for different email servers and firewalls, so check your documentation. Completely stopping an unlimited number of inbound requests can be impossible, but you can minimize the impact of the attack. This setting limits the amount of server processor time, which can help during a DoS attack. 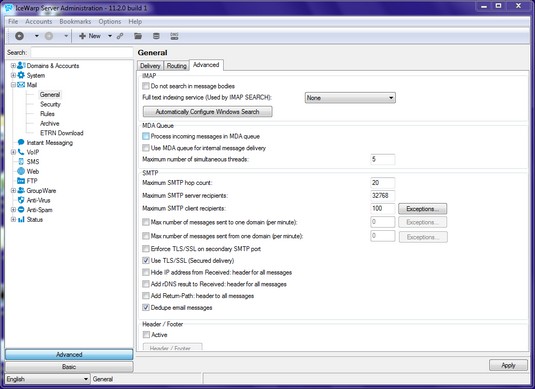 Limiting the number of resources that handle inbound messages.

Even in large companies, or if you’re using a cloud-based email service such as G Suite or Office 365, there’s likely no reason why thousands of inbound email deliveries should be necessary within a short period.

Email servers can be programmed to deliver emails to a service for automated functions, such as create this e-commerce order when a message from this account is received. If DoS protection isn’t built into the system, an attacker can crash both the server and the application that receives these messages, potentially creating e-commerce liabilities and losses. This type of attack can happen more easily on e-commerce websites when CAPTCHA (short for Completely Automated Public Turing test to tell Computers and Humans Apart) isn’t used on forms. This can be problematic when you’re performing web vulnerability scans against web forms that are tied to email addresses on the back end. It’s not unusual for this situation to generate thousands, if not millions, of emails. It pays to be prepared and to let those involved know that the risk exists.

You can implement the following countermeasures as an additional layer of security to guard against email hacks:

Kevin Beaver is an independent information security consultant with more than three decades of experience. Beaver specializes in performing vulnerability and penetration testing and security consulting work for Fortune 1000 corporations, product vendors, independent software developers, universities, and government organizations. He has appeared on CNN and been quoted in The Wall Street Journal.