How to Use a Stylus on Your Tablet PC

Explore Book Buy On Amazon
Tablet PCs feature a touchscreen. You can use your finger as an input device, but your finger is short and stubby and, please, you need a manicure. A better option is to use a digitizer pen, or stylus.

The stylus is a pointing device, like the mouse. For the most part, it works just like a mouse: Tap the screen to click, double-tap, right-tap, and so on.

Okay: There’s no such thing as a right-tap. Before using it, however, take a look at the pen. Check out the important parts. 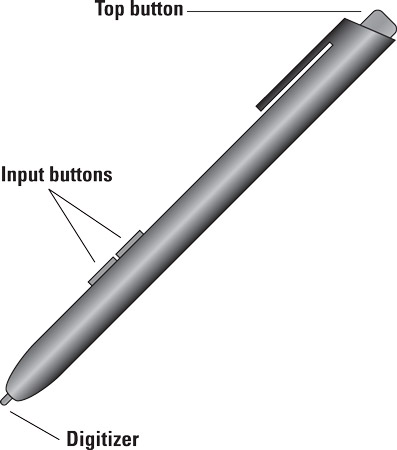 A typical tablet PC stylus
The stylus pen works by touching the tablet’s screen, which is a digitizer. In Windows, the stylus’ touch is interpreted similarly to mouse movement. You can point the pen at the screen, touch the screen, and manipulate items in interesting ways, as covered elsewhere in this chapter.

The function of the pen’s buttons varies. Generally speaking, one of the input buttons is the right-click button. On a two-button stylus, the second button is the Erase button.

Some tablet PCs come with a stylus. If not, the stylus must be purchased as an add-on. As long as the stylus is Windows-compatible, you can use it on your tablet PC. But remember:

Just because your laptop features a touchscreen doesn’t imply that a digital pen works as an input device.

To confirm that your tablet PC can use a digital pen, obey these steps: The Pen item in the Settings app can also be used to adjust aspects of the pen. The number of options available depend on the pen’s hardware capabilities.

Some tablet PCs feature a pen tether, a place where you can attach the stylus to the tablet by using a nylon cord. The tether comes in handy for all of us pen-droppers, who loathe the awkwardness of searching underneath an airline seat for anything.

The Microsoft Surface Pen is a Bluetooth wireless peripheral. It connects automatically to the Surface tablet. Other styluses may require additional setup, such as Bluetooth pairing or another type of interface. Some simpler styluses may work by simply interacting with the laptop’s touchscreen.

How to use the pen as a mouse

Most of the time, you use a digital pen with your tablet PC just as you’d use a mouse on a desktop computer. It makes an excellent pointing device, but it does have its quirks.

As you hover or point the mouse on the screen — without touching the screen — you see a pen pointer appear. This tiny target is called the pen cursor.

It’s easier to navigate menus when you hover the pen, as opposed to dragging the pen.

You can always use your finger to tap or drag items on the screen. I find it easier to use my finger to swipe through a document or move a window.