Explore Book Buy On Amazon
Without a battery, your laptop would be merely a tiny, overpriced PC. You need the battery to give the laptop its power of portability. There also comes a battery of battery issues, most of which involve squeezing the largest amount of life out of a limited supply of battery juice. 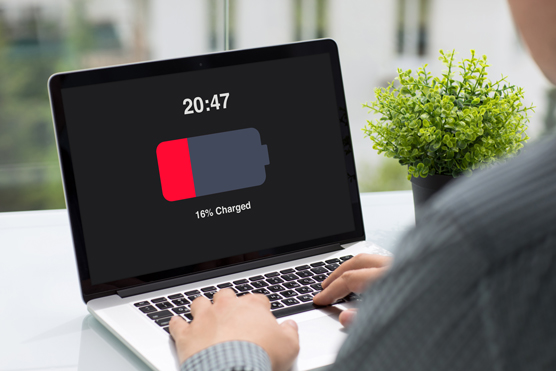 Don't drop the battery, get it wet, short it, play keep-away with it, open it, burn it, or throw it away

To save a bit on battery life on the road, lower the brightness level on your laptop’s screen just a hair — or perhaps as low as you can stand. This reduction definitely saves the juice.

Power down the hard drive

The motors in your laptop consume the most power. That’s bad news. The good news is that many newer laptops have no motors. The only motor left is the hard drive, and this hardware is being replaced quickly by the solid-state drive (SSD).

If your laptop does have a hard drive, know that disk intensive programs will keep the device active and that such activity helps drain the battery faster. Such intensive programs include databases or any program that frequently accesses storage. Larger programs also impinge upon the hard drive’s motors; see the next section.

For laptops that sport optical drives — yikes! Those things draw a lot of power. I didn’t use the optical drive while my laptop ran on battery power.

One way that the laptop’s mass storage conspires with the operating system to drain the battery quickly is when the virtual memory manager pulls a disk swap. The way to prevent it is to add memory (RAM) to your laptop.

Virtual memory has nothing to do with virtue. Instead, it's a chunk of storage space that Windows uses to help supplement real memory, or RAM. Mass chunks of information are swapped between RAM and your laptop's storage, which is why you never see any Out of Memory errors in Windows. But all that memory swapping drains the battery.

If your laptop lacks a hard drive access light, pay attention to how Windows behaves. Do you see a pause as you switch programs? Is the keyboard acting sluggish? If so, you’re witnessing memory being written to and read from the laptop’s storage. That action drains the battery.

Though not every laptop is capable of a RAM expansion, if yours is, consider adding more memory as a worthy undertaking.

Even when you cannot add more memory to your laptop, battery life can be extended by economically using the memory you have.

To optimize performance, I recommend running only a few programs at a time on your laptop when you're using the battery. For example, you might be reading email in your email program, browsing the web, editing a document in your word processor, and keeping a game of Spider Solitaire going in another window. All this activity is unnecessary, and shutting down the programs you're not using helps save battery life — not a lot, but some.

If your laptop lacks a removable battery, you have nothing to worry about. If the battery can pop out, treat it with gentle, loving care.

Do not attempt to short the battery or try to rapidly drain it.

Store the battery if you don't plan to use it

Don’t let a battery sit. If you keep the laptop deskbound (and nothing could be sadder), occasionally unplug the thing and let the battery cycle, just to keep it healthy. That's the best thing to do.

When you would rather run your laptop without the battery inside, or when preparing a spare battery for storage, run down the battery's charge to about 40 percent or so and then put the battery in a nonmetallic container. Stick the container in a nice, cool, clean, dry place.

A lithium-ion battery has an expiration date! After several years, the battery dies. This is true whether you use the battery or store it.

Understand that batteries drain over time!

No battery keeps its charge forever. Eventually, the battery's charge fades. For some reason, this surprises people. “That battery was fully charged when I put it into storage six years ago!” Batteries drain over time.

Yet, just because a battery has drained doesn't mean that it's useless. If you stored the battery properly, all it needs is a full charge to get it back up and running again. So, if you store a battery (see the previous section), anticipate that you'll need to recharge it when you want to use it again. This process works just like getting the battery on the first day you set up your laptop; follow those same instructions for getting the stored battery up and running again.

Deal with the low-battery warning

Thanks to smart-battery technology, your laptop can be programmed to tell you when the juice is about to go dry. In fact, you can set up two warnings on most laptops. The idea is to act fast on those warnings when they appear — and to take them seriously! Linger at your own risk. It's your data that you could lose!

The real trick, of course, is to ration the battery power you have. Here’s a summary of tips, some of which are found elsewhere in this book:

Hibernate! When time is short and your laptop has the Hibernation smarts, just hibernate.