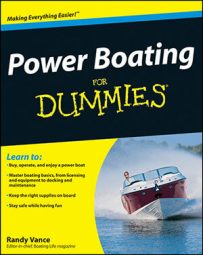 Explore Book Buy On Amazon
Power boating is a fun and relaxing hobby so long as your boat is seaworthy and ready to launch. Simple checks can help make sure that it’s both. As one of the more powerful crafts on the water, you need to know when to give way and when it’s your right to stand on course when encountering another boat.

How to determine the seaworthiness of a power boat

Whether you’re buying a new or pre-owned power boat or preparing to sell yours, you need to make sure that the boat is shipshape and seaworthy. The following list spells out the checks to make before you buy or sell a power boat:

Checks to make before you launch your power boat

Before you launch your power boat, it pays to run through a short checklist to make sure that your boat is ready for the water and ready to disengage from its trailer. Doing the checks in the following list can save you from making embarrassing, and potentially harmful, mistakes:

When you’re cruising along in your power boat, you’re rarely alone on the water, so you need to know, and follow, boating rules. In boat-speak, you and your vessel either stand-on course because you have the right-of-way, or you give way to a vessel and let it pass first. The action you take depends on what you and the other vessel are doing.

Sailboats under sail power only are always the stand-on vessels in crossing and meeting situations, so look out for them when you’re under power. Also, commercial vessels restricted by their draft or by fishing gear, such as nets or trawls, hold privilege over all recreational vessels, including sailboats.

When all else fails

When it seems like no one but you knows or follows the rules, the rules say you must give way to avoid a collision. If you exercise stand-on privilege and an accident results, you’ll be held at least partially responsible.

Randy Vance is a lifelong boater who has made a career of writing about boating. As the operator of a small resort and marina in Missouri for more than 20 years, Vance hosted or appeared on many radio and television programs covering boating and fishing topics. During his tenure at Boating Life, the magazine and some of Vance's articles have won awards in many publishing circles.