Use the Rule of Thirds in Photography

You can get precise and use the Rule of Thirds to position the center of interest in the frame. Great photographers have composed their images to draw viewers to the focal point since the beginning of photography. Of course, they probably got the idea from studying the works of great artists.

However, move the tree to the side of the frame and you have a more interesting image. The tree is the visual anchor to which the eye is drawn.

Imagine that your camera viewfinder is divided into three sections vertically and horizontally. A power point is where the borders of two sections intersect. Instead of placing your subject or center of interest in the middle of the frame, place it on a power point.

Some digital cameras provide a grid in the viewfinder or on the LCD monitor that you can use to compose your images according to the Rule of Thirds. The figure shows an image that has been composed using the Rule of Thirds. A grid overlay is also included for reference. 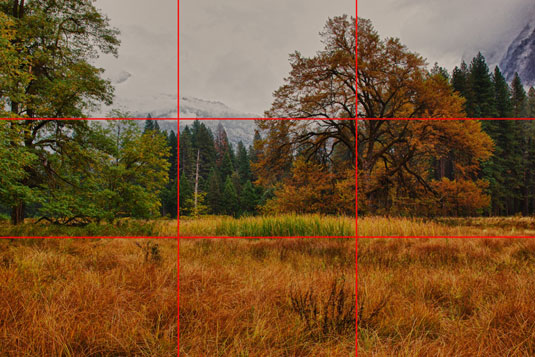