The Best Time of Day for Nature Photographs

Sunlight has definite properties depending upon the time of day you photograph. Morning sunlight is soft and is often the best time to photograph nature, imbuing objects with a soft golden glow.

The first hour of light in the morning and the hour preceding sunset is known as “Golden Hour,” which is also known as “Magic Hour.” This is a great time of the day to photograph the beauty of nature. The contrast is less during this time of day, and the shadows are not as dark, or as stark, as they are during the middle of the day.

If you don’t have the sun in your picture, the dynamic range is less, which means you stand less of a chance of having blown-out (overexposed) highlights. Golden Hour light is warm and more diffuse because it travels through more atmosphere.

Photographers think of photographing the sunrise or sunset when they think of Golden Hour. But any type of nature photography looks great when you shoot in Golden Hour.

Because of the softer shadows, late afternoon light is wonderful for photographing wildlife and birds. Just make sure that the sun is shining on your subjects. If your subjects are partly shaded, you’ll be dealing with a wider dynamic range, and important details like one of the animal’s eyes may be hidden.

Wait for the light

If you don’t have the right light for your photograph, wait. Things can change quickly, especially in the early morning or late afternoon. Light can make the difference between a mediocre photo and a WOW photo of a scene.

If you’re photographing in the afternoon when the light is harsh, but there are clouds in the sky, wait a few minutes until a cloud eclipses the sun. If it’s a thick cloud, you’ll have very nice lighting. If it’s a thin cloud, the harsh light will be diffused to an extent, and you’ll get a better photograph than you would have without the clouds.

In addition to buffering the light, a cloud drifting by can add interest to a photo. Clouds can be used as compositional elements as well as light modifiers. Wait patiently until the cloud is in the right position to add interest to your photograph. 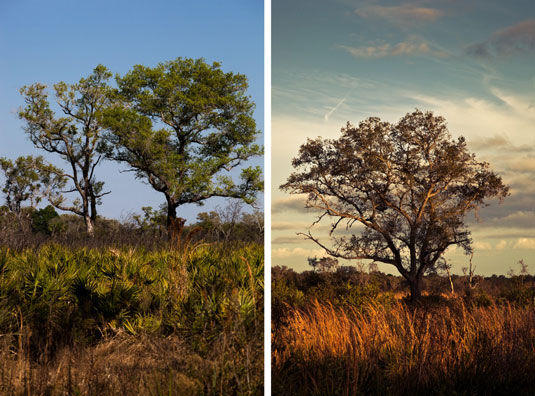