Algae and Your Saltwater Aquarium

Explore Book Buy On Amazon
One thing is certain, not all algae are alike. Although a number of formal classifications have been set up for algae, and scientists recognize at least eight major divisions, not all occur in the typical aquarium. Some kinds are desirable, and others are not. Some are typically referred to as seaweeds, others are planktonic, and some are both.

There is really no point in reviewing all the various kinds of algae, so the following sections concentrate only on those that you’re most likely to encounter or purchase for your marine aquarium.

Traditionally called the Chlorophyta, green algae have now been technically separated into several taxonomic groups, but green algae is a much easier term to remember. With more than 7,000 species, this group of algae is the most diverse, but only about 10 percent of the green algae are marine forms. These are typically the most beneficial of the algae, although some species are less desirable. They’re green in color because their chlorophyll pigments are identical to those of higher plants.

Although many green algae are seaweeds, the planktonic spores of some species aren’t visible to the naked eye but appear as a green cloudiness in the water. These algae sometimes form a green film on the aquarium glass. Larger green algae species may come in desirable plantlike shapes or less desirable hair and mat-like forms. The most attractive species of green algae are cultivated and sold as attractive additions to your aquarium.

The following types of green algae are popular: 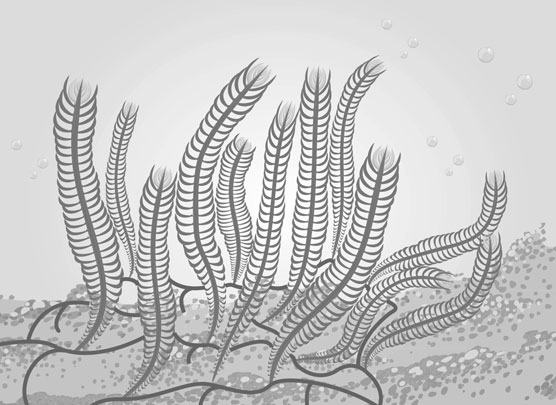 An example of Caulerpa, the most common type of green algae.

Hair algae are less desirable. These algae form thick, hair-like mats that can carpet your aquarium. For a fish-only tank, this matting will be simply ugly, but in the reef tank, it can smother and kill live corals. Make efforts to control hair algae in the main aquarium.

This group of algae, called the Rhodophyta, contains more than 7,000 species, and many are marine seaweeds. Although most red algae are multicellular and grow attached to rocks and other algae (see the following figure), some are single-celled forms.

An example of red algae.

Red algae are red because of the pigment called phycoerythin, which absorbs blue light and reflects red light. Their coloration, which depends on how much of this pigment they have, ranges from reddish yellow to bright red to greenish blue and brown. Because blue light penetrates much deeper than red light, these algae typically live at deeper depths and are well adapted to low lighting conditions.

A lot of red algae are introduced into the aquarium on live rocks. The most common are called coralline red algae, which secrete a hard calcareous shell the way corals do. These algae are considered important in the formation of tropical reefs and, in some areas, may contribute more to reef structure than corals. They’re beneficial to an aquarium, encrusting rocks and even spreading to the fixtures and glass.

Belonging to the class Phaeophyceae, the brown algae comprise about 2,000 species that are predominantly marine seaweeds. There are no single-celled forms of brown algae (the simplest is a branched filamentous organism, which is technical information that you don’t need to remember).

Their brown coloration results from the dominance of a xanthophyll pigment, which masks other pigments including chlorophyll. Colors of brown algae range from pale beige to yellow-brown to almost black.

The most common brown algae, called kelp, are the largest algae, the ones that attain lengths greater than 200 feet. The giant kelp forms expansive seaweed forests off the coast of North America and provides habitat and shelter for many organisms. Tropical waters have fewer species of brown algae.

Some forms of brown algae come attached to live rock when you purchase it. Like the red algae, small amounts of brown algae are generally beneficial for a saltwater aquarium.

Sometimes referred to as brown algae because of their coloration, diatoms are microscopic cells composed of overlapping half shells of silica. The diatoms are planktonic and benthic (live on the bottom) algae that spend their lives floating in the ocean or in the sediments. Their silica shells, called frustules, are remarkably geometric in shape, but their microscopic size makes them difficult for the average aquarist to see.

These algae proliferate in aquariums with high nitrate levels. They’re usually the first algae to establish themselves. Diatoms form a brown slime on the gravel, rocks, decorations, and aquarium glass (see the following figure). Heavy concentrations of diatoms discolor the water. As the aquarium matures, these algae should disappear. Until they do, you can scrape them away to keep a clear view of your aquarium pets. 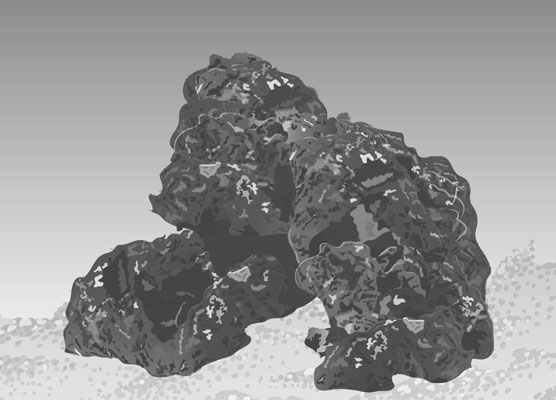 Diatoms can discolor the water.

Members of this group are single-celled organisms that have the characteristics of both plants and animals (refer to the following figure), but they’re still considered algae. Although it sounds like a prehistoric reptile, the name dinoflagellate actually refers to their forward swimming motion created by their tails, which are called flagella. 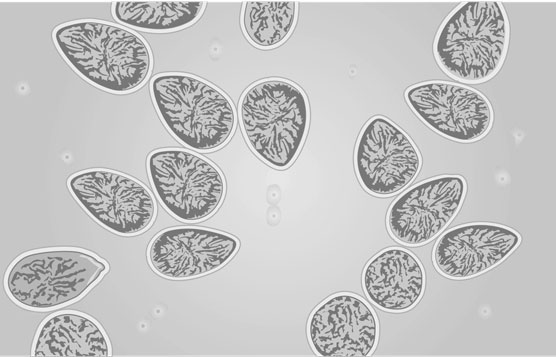 Dinoflagellates can be both good and bad for your aquarium.

The best defense against dinoflagellates is to maintain a proper biological balance in the aquarium and avoid situations of extreme cleanliness.

The dinoflagellates that are of greatest interest to aquarists are those that live in live corals, sponges, clams, and anemones. These are called zooxanthellae, and I discuss them in Chapter 4. These algae form a symbiotic relationship with their hosts, providing beneficial organic carbon that they produce by photosynthesis.

If you’re an invertebrate enthusiast, make sure you have sufficient lighting to keep zooxanthellae dinoflagellates alive. If they die, in all likelihood, their host will die.

The blue-green algae are technically not algae at all: They are bacteria. For years, they were considered algae because they’re aquatic and make their own food. This group of bacteria is called the Cyanobacteria, and it has the distinction of being the oldest known group of organisms at more than 3.5 billion years old. Because they’re bacteria, blue-green algae are small and single-celled, but they grow in large enough colonies that you can see them. Although called blue-green algae, they can have colors ranging from black to red to purple.

They may be earth’s bacterial heroes, but when these algae are in your aquarium they can be both good and bad. Like a lot of bacteria, blue-green algae in your substrate are beneficial to the health of your aquarium, feasting on detritus (organic wastes). However, in cases of poor water quality, high nutrients, and poor circulation, they form a dark brownish-red gelatinous mat, called red slime, on rocks, gravel, and plants in your tank. They’re also capable of producing toxins that poison aquarium fish. If allowed to proliferate, they smother the tank. Unfortunately, few critters feed on blue-green algae, so they must be physically removed with a siphon during a partial water change.

Several products on the market help eliminate slime algae, but the key is to stay on top of your water chemistry, water changes, and water circulation.