How to Select a Dog Training Model

By: Wendy Volhard and Mary Ann Rombold-Zeigenfuse and
Updated: 03-22-2020
From The Book: Dog Training For Dummies 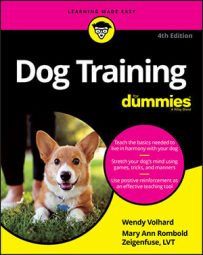 Explore Book Buy On Amazon
You have many ways to train a dog, ranging from rather primitive to fairly sophisticated. Even technology has had its impact on dog training. For example, rather than fenced yards, people often now have invisible fences, which contain dogs within their confines by means of an electrical shock. 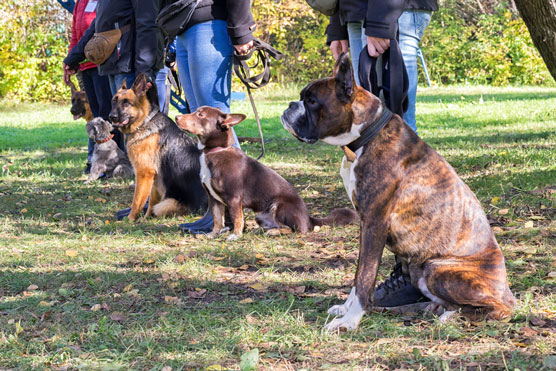 Our approach to training is for people who like their dogs and have them first and foremost as pets and companions or for people who want to like their dogs. Someone pointed this out us when she arrived for class. At that point she didn’t like her dog but wanted to make her child happy by having a dog. Either way, we like your dog and want him to be the best possible dog and you to be the best possible trainer for him.

The ultimate object of any training is to have your dog respond reliably to your commands. Ideally, he responds to your first command. Telling your dog to do something only to have him ignore you is frustrating. Think of Buddy’s response in terms of choices. Do you want to teach Buddy to think he has a choice of responding to you? You want a dog that understands — after you have taught him — that he must do what you tell him, no matter what is happening around him. A truly trained dog listens for your voice above all distractions.

Distractions do cause Buddy to struggle to hear your voice above other things as does the genetic influence of those things that Buddy was bred to do instinctively, that which is in harmony with his basic nature. Are all dogs the same to train or does the breed or mixture of breeds make a difference? Like people, dogs are individuals and have individual needs. Understanding breed characteristics and different teaching models helps to make the job of training that much easier.

Before you embark on your training program, consider what you want your dog to master, and then compare your answer to the task for which his breed was originally bred to do. Many people typically select their dogs based on appearance and without regard to breed-specific functions and behaviors. Whatever trait is in harmony with the breed of your dog is easier to teach or harder to break. For example, a Beagle uses his nose everywhere he goes. Teaching a Beagle to track or follow a scent is much easier than teaching a Greyhound to track. Greyhounds are bred to visualize movement rather than to sniff out prey.

Although most dogs can be trained to obey basic obedience commands, breed-specific traits determine the ease or difficulty with which they can be trained. You also need to consider other traits, such as energy levels and grooming needs. High-energy dogs must have outlets for all of that energy. Chapter 20 discusses problems that occur if your dog doesn’t get the exercise he needs. After all, a tired dog is a happy dog, and a tired dog has a happy owner. As for grooming, brushing, bathing, and clipping of hair coats is time consuming and expensive if you hire a professional. For a dog to be healthy, the coat and skin needs to be cared for regularly.

An excellent resource for breed-specific behavior and traits is The Roger Caras Dog Book: A Complete Guide to Every AKC Breed, by Roger Caras and Alton Anderson (M. Evans & Company). For each breed, the book lists on a scale from 1 to 10 the three characteristics you should pay attention to: the amount of coat care required, the amount of exercise required, and the suitability for urban/apartment life.

Training a dog: What are you really doing?

When training a dog you’re either teaching him to do something (build a behavior) or not to do something (abstain from a behavior). For example, consider the Stay command. Are you teaching your dog to remain where he is or not to move from where he is? You can look at any command and ask this question. When training a dog, you’re usually building a behavior. Look at the following table to help understand. In the table, the first column lists how to build a behavior. The second column lists how to abstain from a behavior. When talking about behavior in proper training terminology, positive means adding something, indicated with the plus sign (+), and negative means removing something, indicated with the minus sign (–). These two terms don’t mean good and bad which is so often associated with positive and negative.

We need to define two other words in terms of behavior:

When training a dog, you want the dog to do something new and different. To do that, you need to motivate him by either giving him something he wants for doing the new task or getting him to avoid something he doesn’t want for not doing it. Consider the following: Which approach works best? It may depend on how hungry the dog is, how much he likes the treat being used, and something more interesting isn’t going on around the corner, such as a BBQ. In the negative reinforcement approach, it may depend on how hard of a pinch is and if he doesn’t mind the pinch versus the effort it takes to climb the stairs.

Training comes with so many variables. The BBQ next door is a distraction, which is why it’s best to do early training when no distractions are around. The ability to climb the stairs or the difficulty of the task you’re teaching plays a big part on how willing your dog is. Buddy may suffer the consequences instead of climbing the stairs or jumping into a pool if water is too scary. Make sure you break the task you’re teaching into small parts to make it more easily understood and achievable.

You later can add distractions to the training after Buddy has learned the command. Distractions make the task more difficult for Buddy. When working with distractions, your dog needs to choose doing the task over being distracted. The object of distraction training is to train until your dog does the task no matter what is going on around him simply because you asked him to do so.

When training a dog to stop doing an unwanted behavior, there should be a consequence. The consequence can be either adding something the dog doesn’t want or removing something he does want. Consider the following: