Cluing into a Puppy's Housetraining Instincts 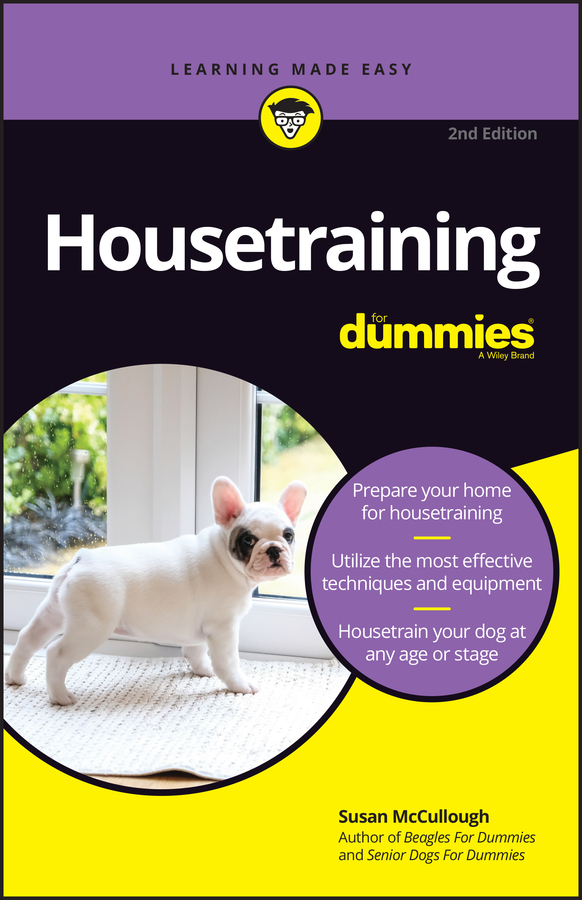 Almost any dog can be housetrained (housebroken). However, the challenges of teaching a puppy to "go potty" may differ from those you encounter if you try to teach the same maneuvers to an adult dog.

If you got your puppy from a reputable breeder, the pup may already know the rudiments of proper potty behavior. A well-bred pup has had many opportunities to learn about keeping clean and getting along with other dogs (and people) — both of which are important pre-housetraining skills. A puppy who's nailed those basics will be easier to teach than one who lacks such knowledge.

Many breeders go even further. They'll take their puppies outside every morning and after meals, and they'll praise the little guys when they eliminate. If your puppy's breeder has done that (ask when you're interviewing prospective breeders), she's already done some of your dog's housetraining for you. That may also be true of a dog you adopt from a shelter, rescue group, or individual.

But even if your new puppy has aced those preliminary lessons, there's one crucial lesson he's only just starting to learn: the lesson of self-control.

Bladder control and your puppy

To put it simply, your little guy just can't hold it — at least not for very long. A puppy under the age of 4 months doesn't have a big enough bladder or sufficient muscle control to go more than a couple of hours without eliminating. As he gets older, though, a pup's ability to control himself gradually increases. And by the time he reaches adulthood (at about one year of age), a healthy dog usually has plenty of self-control.

However, even a dog who appears to have an iron bladder isn't necessarily housetrained. The fact that he can hold it doesn't necessarily mean that he will hold it. That's because an adult dog may be burdened with mental baggage or just plain bad habits that can create additional obstacles to housetraining.

For example, if you adopted your young adult dog from an animal shelter, her previous owners may not have bothered to housetrain her — or if they did, they may have done a poor job of it. Either way, her failure to master proper potty deportment may well have been what landed her in the shelter in the first place.

Many shelter and rescue dogs have behavioral problems that manifest themselves as inappropriate elimination — for example, the shy dog who rolls over and pees whenever someone stand above her and looks directly at her. Even a dog who's been a model of proper bathroom behavior at one point in her life can later appear to forget what she's been taught.

Not surprisingly, then, housetraining an adult dog is often less straightforward than housetraining a puppy. The grownup pooch who has less-than-stellar bathroom manners often needs to unlearn some bad but well-entrenched habits. The person who lives with such a dog may need to develop his detective skills and figure out why his canine companion keeps making bathroom mistakes. By contrast, all a healthy puppy usually needs to become housetrained is some time to grow and to develop some self-control, and some guidance from you in the meantime.

In any case, though, if you know something about your canine friend's instincts and impulses, you'll have a leg up on your efforts to housetrain him.

Even while he's still with his litter, a puppy is learning a lot about life as a dog. From his littermates, he learns not to bite too hard, if he bites at all. He learns how to jockey for position among his brothers and sisters at feeding time. And he learns a lot about proper bathroom behavior.

Puppies start learning elimination etiquette from the time they're about four or five weeks old. That's the age when they have sufficient motor skills to start wandering around the nest where they've been living with their mom, and wandering outside the nest a bit, too.

The mama dog takes advantage of this ability. When the pups indicate they're about to go potty, she uses her nose to push them outside the nest. That way, their poop and pee won't stink up the doggie domicile. If the mama dog and puppies are lucky enough to be residing in the home of a good breeder, several layers of newspaper will be at the other end of the room for the puppies to eliminate upon.

Mom-dogs don't urge their offspring outward just to be canine housekeeping whizzes, though. Their efforts are based on something much more important: a biological drive to survive. That drive is rooted in the wild, where mother wolves are equally intent on making sure that their pups don't eliminate within their dens. The reason? Poop and pee stink — and the smell from either could attract a predator. By eliminating away from the nest, the scent draws a would-be predator away from the den, too.

Back in the domestic realm, a good breeder will reinforce the mama dog's efforts. He's placed the puppies' nest and eating area away from where he wants them to eliminate. After the puppies have eliminated on the newspaper that he's placed on the floor for just that purpose, he whisks the soiled papers away and replaces them with fresh ones.

By seven or eight weeks of age, most puppies have developed enough control to master this first bathroom lesson. They have to poop and pee every couple of hours or so, but they've learned to listen to their bodies, and they can tell when they need to go. When they get those urges, they'll try to scurry away from their den before giving in to that compulsion to squat. This effort to eliminate away from the den signals that a puppy is ready to begin learning the rudiments of housetraining.

From dog nest to dog den

The lessons a puppy learns about keeping clean go way beyond what his mom makes him do. The nest that his mother teaches him to help keep clean is really his first den — and dens are a big deal in the lives of most dogs.

But what exactly is a den? Are we talking wood paneling and a wet bar here? Maybe a home theater system and new leather recliner? Not exactly.

For a dog, the den is simply an area that he can call his own. Generally, it's a small place that's at least somewhat enclosed on two or three sides but also is open on at least one side. The area may be dark, but it doesn't have to be. What it does have to be is a place where the dog feels safe and secure.

When a dog seeks out his den, he echoes the behavior of his wild cousin, the wolf. Wolves make considerable use of dens when raising their young. Mother wolves bring up their pups in dark caves that are hidden from the view of an outsider, but from which the wolf family can see the rest of the world. These caves, or dens, are perfect places to leave a litter of wolf pups when mom goes hunting for food with the rest of the pack.

The domestic dog may not need a den to ensure his physical survival, but his urge to find a den is still very strong. For example, a dog could create a temporary den under a desk or table. Another alternative is a dog crate. Some people may think crating a dog is cruel, but the dog doesn't think so. Rather, the crate provides an atmosphere of safety and security.