Taking Your Rottweiler to a Dog Park

By: Richard G. Beauchamp and
Updated: 03-26-2016
From The Book: Rottweilers For Dummies 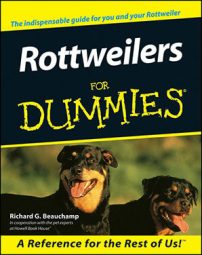 Keep your Rottweiler on a leash at all times when you are in a park or other public recreation area. Although your well-trained Rottweiler would never think of threatening anyone, many people are thoroughly convinced that all Rottweilers are dangerous and become terrified at the sight of one, particularly if he is off-leash. So, avoid the drama and use the leash. The popular Flexi-leads can extend themselves up to 25 feet if there is no one around to bother you, but the retractable leads give you constant control over your dog at all times.

If you want to use a nearby park, check with the local Department of Parks and Recreation to see what the rules are that apply to dogs. Some parks allow dogs only during certain low-use hours, and some even allow dogs to be off-leash during specified time periods.

Many communities are creating special dog parks or are fencing in certain portions of public parks in which dogs are allowed to be off leash. The value of these dedicated areas is that they give a dog plenty of opportunity for some serious exercise and help improve socialization by letting the dog run with other canine pals.

Even when you are in a dog park where having your dog off-leash is perfectly acceptable, make sure your Rottweiler has been properly socialized to accept other dogs. Is your Rottweiler of a nature to withstand being threatened or challenged by another dog without flying into a rage?

Even though your dog, and nine out of ten of the other dogs at the park, may be well socialized, the tenth dog may be the culprit. You know, like the kid who can't seem to get through a single school recess without antagonizing someone? The additional problem with dogs in groups is that even though a troublemaker may pick on just a single dog to fight with, fighting ignites a pack reaction, and soon every dog with a single aggressive bone in his body has to dive into the fray.

When trying out an off-leash dog park, remember that you and your dog are the new kids on the block. Proceed with care and make sure no bullies are present. If a dog seems determined to rule the pack through aggression, take your Rottweiler home and try the park another time. Most Rottweilers will not tolerate being pushed around for no good reason, and even though they may not start a fight, the average Rottweiler is more than capable of finishing one.

Richard G. Beauchamp, a respected breeder and prominent dog show judge, has been involved in every facet of purebred dogs for most of his life. He is a longtime Rottweiler enthusiast.