If you have your heart set on a Pug, you probably should spend some time brushing up on your choices (puppy or adult, fawn or black, show dog or pet) before you actually bring home the Pug who you want for your own. After all, you do want yours to be the most perfect dog ever, don't you? Sure, you want companionship and a healthy, good-natured puppy, but you also want your Pug puppy to look like a Pug. You're selecting this breed precisely because you're drawn to the Pug's unique appearance (see Figure 1). 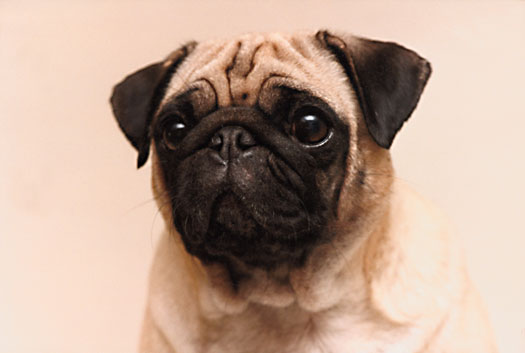 Believe it or not, the Pug doesn't look the way he does by accident. He's the result of several generations of careful planning by many conscientious breeders who have been following the same design.

The design for the perfect Pug was first formulated by Pug lovers in England in 1885 and reaffirmed in 1931 by members of the Pug Dog Club of America. Recognized by the American Kennel Club (AKC), the design, or breed standard, describes exactly how the Pug should look and act.

This standard includes the dog's ideal structure, personality, gait, and general overall appearance. When breeders match sires (fathers) and dams (mothers) together, they hope that the puppies they produce come as close as possible to the ideal breed standard.

Figure 2 shows how breeders and veterinarians describe parts of a Pug's body. You may want to refer to this figure as you read the following list, which explains the main physical characteristics of a Pug. 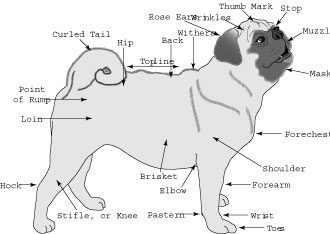 Figure 2: Parts of the Pug.


A Pug's snout, or muzzle, is very broad. When his mouth is closed, you shouldn't see his teeth or tongue. All those marvelous wrinkles around Puggy's face fold over his black nose and add character to his expression.

Black Pugs should be a shiny, jet-black color. If there is any white on the black Pug, it's called a mismark. Fawn Pugs may have a white mark on their coats, too, but it blends well into the lighter coat and doesn't show up as easily. Fawn Pugs are more popular than the black dogs, and the contrast between the black muzzle and the fawn Pug may be one reason. The contrast is striking and should be very distinct.

Another interesting Puggy marking is a darkened spot centered on Puggy's forehead that is known as a thumbmark or a diamond. This area is formed by the wrinkles on the forehead but looks like a thumbprint.

Going away from you, the Pug's legs should move in a parallel pattern along the same line as the front legs without any motion flinging outward. When Puggy speeds up to a trot, his legs should move toward a center line.

Although the breed standard calls for the Pug to be steady and charming, his average behavior ranges anywhere from very active to least active. So, when you're choosing a Pug, remember that the typical Pug personality is anything within that range. Not all Pugs are couch potatoes or high energy. Somewhere in that broad temperament spectrum is the perfect Pug for you.