Interpreting Your Chihuahua's (and Other Dogs') Body Language 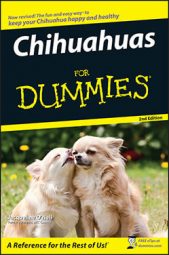 Dogs may not talk (except on television commercials), but if you watch your Chihuahua's body language, you soon find out how to read her needs and even predict her next move. Your Chihauhua (Chi for short) communicates through her facial expressions, including her ears, eyes, brows, lips, nose, and mouth. She also talks through her tail, coat (hackles), and body position, and emits a variety of sounds.

To start you off, here are some descriptions of general canine body language:

Okay, you take it from here. While the body language above is universal across breeds, a Chihuahua's going to have many unique mannerisms all her own. Enjoy.

Understanding where "the jitters" come from

Some dogs are born nervous because of poor breeding. But most scaredy pups act that way because they weren't socialized at the right time. Let's forget dogs for a minute and think about children:

Imagine how a child (let's call him Harry) reacts on his first day of school if he had been so overprotected by his parents that it was also his first experience away from home. Harry's anxiety increases during the walk or drive to school. Traffic sounds other children take for granted startle him, and the sight of so many strange buildings, vehicles, and people confuses him. When he arrives, the big school building intimidates him, especially if he doesn't know how to navigate stairs. In the classroom, Harry's fear of the strange adult called Teacher keeps him from focusing on the lesson. On the playground, he doesn't know how to respond to his high-spirited classmates. Feeling vulnerable and uncertain, he may back into a corner, too terrified to talk, or become defensive and try to fight off the first child who approaches.

Now let's add another wrinkle. What if Harry goes on two outings before starting school? Both times, he visits his pediatrician for vaccinations. In his mind, leaving home, entering a strange building, and meeting a stranger, all correlate to pain. Now how long does it take Harry to trust his teacher and be able to relax, let alone learn? A classroom observer who didn't know Harry's history probably labels him as shy or stupid, perhaps even stubborn.

Luckily for children, scenarios like that seldom occur. Most parents take their kids out often and by the time the youngsters enter kindergarten, they adjust quickly. Puppies, especially Toy breed puppies, don't have it so good. They're often raised like poor Harry.

Good breeders socialize their puppies before selling them, and some of the best refuse to sell a puppy before it is 3 months old. Don't worry. Even though the puppy loves its breeder, it transfers that love to you in no time. Besides, socialization is ongoing, and plenty of fun stuff is left for you and your puppy to do.

The first 16 weeks of your dog's life are critical to her social development. What a puppy discovers during that short time shapes her personality, making her outgoing or shy, happy-go-lucky, or cautious. The brief time correlates to when wild pups or cubs explore outside the den for the first time, quickly learning lessons in survival. Absorbing everything in a hurry is a necessity because a cub that makes a mistake in the wild rarely gets a second chance.

Although domesticated for centuries, dogs still arrive in the world programmed to relate to their surroundings during their first four months of life. In an ideal situation, a pup finds out how to behave around dogs during her first two months. That's one reason why a good Chihuahua breeder keeps the litter together until the puppies are at least 8 weeks old. Between 8 weeks and 12 weeks, the youngsters are mentally mature enough to leave their canine family, and are the ideal age to settle into human families. From then on, their people shape their personalities.

What makes these critical periods critical? If a dog isn't socialized during it's puppyhood, it never becomes as confident a companion as it can be. Breeding also plays a part. Pups from nervous parents tend to be nervous too — unless the parents got that way through a lack of socialization.

Jacqueline O'Neil is a renowned dog breeder, trainer, and award-winning author who has written more than a dozen books on pet care and training.