By: Brian L. Speer and Kim Campbell Thornton and Gina Spadafori and
Updated: 03-25-2021

Explore Book Buy On Amazon
Quieter, neater, and, of course, smaller than their larger relations, the parrots grouped together here include what may be the world’s most popular pet bird, the budgerigar, and others with loads of fans, too, such as the cockatiel.

And don’t forget the parrotlets and the lineolated parakeets, both popular and rising in popularity. These little guys are known for being among the smallest members of the parrot family. Don’t let their size fool you: Some of these small parrots have plenty of personality, and some can be more than enough to intimidate people.

That said, parrotlets and linnies often make affectionate companions, and offer surprising talking ability. Most are reasonably priced, as well.

When Americans think “parakeet,” they’re usually picturing what the rest of the world calls a budgerigar, or budgie. A budgie is a parakeet, but to believe that it’s the only parakeet sadly ignores some of the more magnificent pet birds available. Most popular among these birds are the Asiatic parakeets — ringnecks, Alexandrians, derbians (also known as the Lord Derby parakeet), plum-heads, and mustached parakeets. As a group, they’re known for flashy, vibrant color and long, elegant tails.

Once considered hands-off aviary birds, Asiatic parakeets are gaining ground as more up-close-and-personal pets. When captive raised and well socialized, some of these birds have great potential as affectionate companions and even great talkers — one of the better talkers Brian has ever met is a blue Indian ringneck parakeet named Sid. These species are gorgeous in an aviary, however, and seem to be happy there, too. Some Asiatic parakeets — either in the home or the aviary —have a pleasant and soothing call, while others have a reputation for being moderately noisy.

Parakeets have a wide price range. Smaller, more common varieties may cost as little as $20 to $50. Prices climb according to color or species rarity, to as much as $800 or $1,000. Life spans for well-cared-for birds run from 20 to 40 years. Kim’s African ringneck parakeet, Larry, lived to be 29 years old.

The Asiatics aren’t the only parakeets around. One popular parakeet native to South America is the Quaker, also called the Monk. Quakers are so adept at establishing themselves in the wild in places where they don’t belong, however, that some states and countries don’t allow them to be kept as pets. If your part of the world doesn’t have a regulation against ownership, though, these parakeets can be good companions. (Check with your local agriculture department for restrictions.) States that prohibit or restrict keeping Quaker parakeets include California, Georgia, Hawaii, Kansas, Kentucky, New Jersey, Pennsylvania, Rhode Island, Tennessee, and Wyoming.

Quakers are handsome green-and-silver birds with decent talking potential and affectionate natures, when raised and handled properly. Prices are reasonable for these charmers, from $300 to $700, with an average of $475.

Quaker parakeets earned their name because of the way babies “quake” when being fed in the nest.

The Brotogeris gang are also parakeets of South American origin. These little guys love riding in pockets, are pretty quiet, and aren’t very messy. Primarily green in color with small, contrasting markings, Brotogeris are big guys in little bodies — some even like to pick fights with much bigger birds! The canary-winged parakeet — green with bright yellow under the wings — and gray-cheeked are two of the more commonly available Brotogeris parakeets in the United States. A little more expensive than some other parakeets, well-socialized individuals can start at $400 and go up from there. The Brotogeris species are difficult to breed and rear successfully, making them less common than in years past.

When budgies were discovered by Europeans in Australia in the mid-1800s, they created quite a stir back home in Europe. They had everything going for them — bright color, an affectionate nature, and a real facility for talking. These same traits make this awesome little bird the world’s most popular today. You just can’t top a nice budgie — they have it all!

In some ways, the popularity and availability of budgies has led many people to dismiss them, more so in recent years. Too common, too cheap, too ordinary, these lovely pets are too often considered just a “starter” bird, especially for children. And that idea opens the doors to mass breeding to fill public demand for low-cost sources of budgerigars, which further reinforces any perception of the budgie as a “throwaway pet.” What a waste! 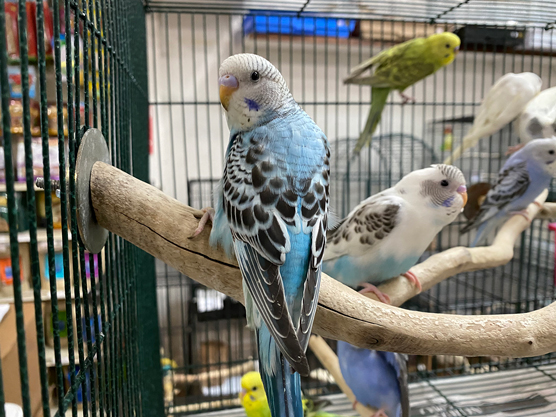 Budgies are often dismissed as common, but they’re fun-loving, beautiful, and smart.

Budgies come in many colors and patterns and two basic body types. The American style of budgie is slender and long, whereas the English budgie is husky, with an almost bulldog look. Their personalities are the same, though, so color or body type is strictly a matter of personal preference.

These versatile birds are suitable for any living situation. Prices range from under $20 for what are typically mass-produced birds to around $100 for more unusual colors in hand-raised birds. You can probably find a hand-raised American type for around $40, and we say that’s a good deal. Although eight years is the common forecast on life span, a well-cared-for budgie can make it well into the teens and beyond.

To make sure you have the best experience with a budgie as a pet, skip the under-$20 mass-produced specimens (which are often a bit of a gamble because of uncertain health, background, and pet potential) and search out a hand-raised baby. A hand-raised little budgie who is really well socialized, already eating a good diet, and shows interest in interacting with you can carry you a long way! Parent-raised birds can be fine as hands-off cage or aviary pets, but we think you can enjoy the greatest rewards from your relationship if you choose a bird you can become friends with.

A talking budgie has the charm to make a statue break out in a smile. If you listen carefully, you may figure out why we think these little guys are equipped to give the better-known big-parrot talkers a run for their money! Their lispy little high-pitched voices are adorable! Some are incredibly good talkers, learning 300 or more words or phrases. A budgie named Puck, from Petaluma, California, holds the record for largest avian vocabulary, according to Guinness World Records, which documented his knowledge of 1,728 words. We think that tiny hand-raised budgie you can carry around in your shirt pocket is worth his weight in gold!

Peach-faced, black-masked, and Fischer’s lovebirds are small, sweet companions who come in a rainbow array of colors, thanks to human genetic meddling. Natural-born snugglers, lovebirds adore holing up in a pocket or other warm, hidden place. They aren’t great talkers, but some can learn a few words and phrases if you have the time and patience to work with them.

For a pet, a single lovebird is best; otherwise, your pair will only have eyes for each other, not for you. Forget that old myth about them dying of loneliness — it just isn’t true. One healthy, well-socialized lovebird will be your contented pal.

Lovebirds are also popular as aviary birds and for breeding purposes, and many hobbyists are working hard to increase the available varieties of these lovely birds.

Fine for almost any living situation, lovebirds have life spans of 8 to 14 years, and well-cared-for birds over 20 years old are out there. Costs run from $50 for the normal peach-faced variety to $200 for newer color variations or less-common lovebird species.

The tiny parrotlet (shown) can fit in your hand, but anyone who owns one can tell you they have as much attitude as any macaw, more proof that good—no, make that great—things can certainly come in small packages. 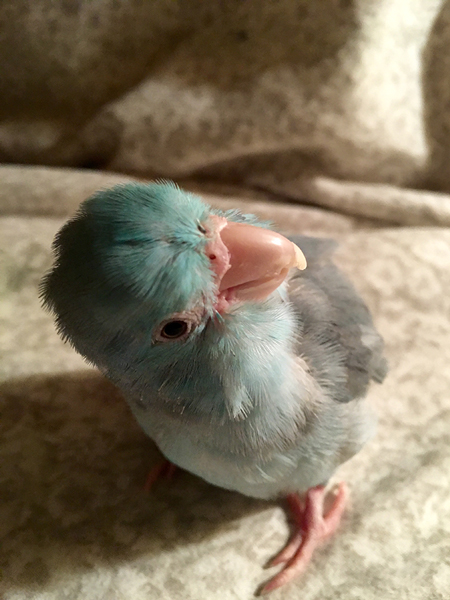 Parrotlets (like this blue mutation of a Pacific parrotlet) are packed with personality and love to be part of your life.

A newer arrival to this group is the lineolated parakeet. These vibrant green, yellow, or blue wonders have great potential for companionship and make wonderful friends to hang out with.

Parrotlets and linnies generally have minimal talking ability, but they’re great fun to handle and to watch. Both can be fabulous to train and can do impressive things! In so many ways, they demonstrate how they’re just big parrots inhabiting a little parrot body!

Reasonably priced, starting at $150 and going up to $500 or so, parrotlets can and should enjoy a life span of up to 20 years. Linnies are priced at about $300 for a pair and typically have a ten-year lifespan.

The cockatiel is likely the most popular single pet bird species, at least among the parrot family. With crests reminiscent of the larger cockatoo, these birds were, for a while, known as “cockatoo parrots” until the modern coinage of cockatiel, from the Portuguese word cacatilho (meaning “little cockatoo”).

Cockatiels (shown) justly deserve their legions of fans. Handsome and affectionate, the cockatiel is a perfect fit for any living situation, and a relatively easy breeder for anyone who wants to give that hobby a try. Many people have enjoyed the adventure of breeding cockatiels over the years, producing lovely varieties of colors and patterns, from the naturally occurring gray to the pale yellow lutino, the pied (blotches of two or more colors), cinnamon, pearl, and albino. 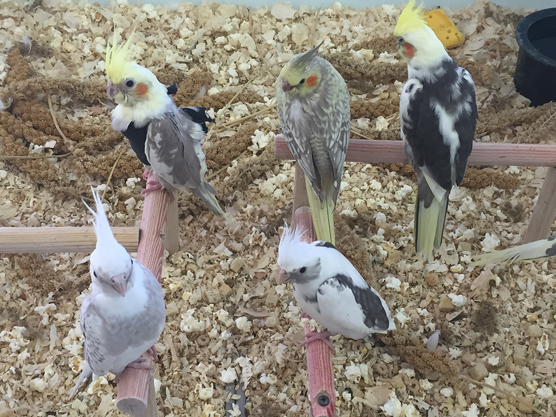 Cockatiels are pleasant to live with and come in a range of color mutations.

Prices can start at $50 for some of the mass-produced birds, and rise as high as $275, with the cost of most pet cockatiels somewhere in the middle. Hand-raised babies and the rarer colors and patterns are at the higher end of the scale. Life spans for most cockatiels are often quoted to run 10 to 14 years, but again, a bird who starts healthy and is well cared for can live well into the twenties and beyond. In Brian’s practice, birds in their late twenties and early thirties are not uncommon.

As with budgies, you can find plenty of mass-produced cockatiels with price tags that may seem irresistible. If you’re looking for a healthy, long-term companion, however, the hand-raised bird is a much better bet, even if the price is higher.

As interesting as the many variations of cockatiels can be, some health problems have slipped into the mix. Some varieties, such as the white-faced and cinnamon, may develop problems on certain formulated diets. Talk to a veterinarian who is qualified and experienced in avian medicine to determine how to best keep these birds in optimal health and how to detect or avoid early problems.

Males are usually better at vocalizing, with whistling a specialty. Cockatiels are generally not the best talkers, but males can pick up a few words or phrases. Don’t let the lack of verbosity dissuade you, though: The gentle cockatiel is about as fine an avian companion as you can imagine.