How to Buy a House: Fundamental Principles for Selecting Your Home 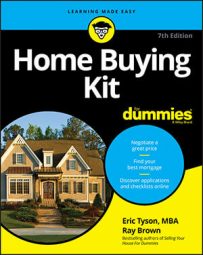 Explore Book Buy On Amazon
Good news. It doesn’t matter whether you buy a log cabin, Cape Cod colonial, French provincial, Queen Anne Victorian, or California ranch-style house. You can make money on any property by following three fundamental principles to select the home you buy. As you read the following home-buying guidelines, remember that they’re not hard-and-fast rules — exceptions do exist.

The principle of progression: Why to buy one of the cheaper homes on the block

An appraiser can tell you that the principle of progression states that property of lesser value is enhanced by proximity to better properties. English translation, please? Buy one of the cheaper homes on the block, because the more expensive houses all around yours pull up the value of your home.

For instance, suppose that your agent shows you a house that just came on the market in a neighborhood you like. At $225,000, it’s one of the least expensive homes you’ve seen in the area. The agent says that the other homes around it sell for anywhere from $275,000 to $300,000. You start to salivate.

Curable defects in a home

If a house is a bargain because it has defects that aren’t too difficult or expensive to correct, go for it. For example, maybe the house is an ugly duckling that just needs a paint job, landscaping, and some other minor cosmetic touches in order to be transformed into a swan.

Problems like these are curable defects — property deficiencies you can cure by upgrading, repairing, or replacing the defects relatively inexpensively. Painting, modernizing a bathroom, installing new counters and cabinets in the kitchen, and upgrading an electrical system are some examples of curable defects.

Depressed property values are another type of curable defect. A high number of short sales or foreclosures in a neighborhood drives property values down. One person’s misfortune is another’s opportunity. Some investors specialize in purchasing distressed properties at rock-bottom prices. These investors then rehab the houses and rent them out with an eye toward selling them for a profit when property values improve.

Incurable defects in a home

If a house has major problems, it’s not a bargain at any price. Who’d want a house located next to a garbage dump? Or what about a really ugly home? Just because the seller made a fortune in the sausage business doesn’t mean that you (or anyone else) would want to live in a house built in the shape of a giant hot dog.

Maybe the house is cheap because a contractor says it’s a wreck about ready to fall down, and you’d have to spend at least $125,000 on a new roof, a new foundation, new plumbing, and complete rewiring.

Enormous deficiencies like these are called incurable defects. They aren’t economically feasible to correct. You can’t fix the fact that a house is poorly located. Nor does it typically make sense to pay $225,000 for the hot-dog house so you can tear it down and build a new home (unless that’s what comparable vacant lots sell for). By the same token, if you pay $225,000 for the wreck and then pour in another $125,000 on corrective work, you’ll have the dubious honor of owning the most expensive house in the neighborhood.

All rehabs aren’t bad. You just need to be prepared for what it takes to manage a fixer-upper.

The benefits of renovating cheaper homes

The less expensive houses on the block are also the least risky ones to renovate, thanks to the principle of progression. For example, suppose that you just paid $225,000 for a house that needs a major rehab. Your construction project is located smack-dab in the middle of a neighborhood of $300,000 homes.

The difference between your purchase price and the value of the surrounding homes approximately defines the most you should consider spending on a rehab.

In the preceding example, you should spend no more than $75,000 to bring your home up to the prevailing standard set by the other houses. Of course, this is assuming that you can afford to spend that kind of money and that you have the time and patience to coordinate the rehab work or do it yourself. As long as you improve the property wisely and stay within your budget, you’ll probably get most or all the rehab money back when you sell the property.

Use the principle of progression in conjunction with location, location, value. Buying one of the better less-expensive homes in a good neighborhood enhances your likelihood of property appreciation in the years ahead.

The principle of regression: Why not to buy the most expensive house on the block

If you buy the most expensive house on the block, the principle of regression punishes you when you sell. The lower value of all the other homes around you brings down your home’s value.

If an evil spirit whispers in your ear that you should buy the most expensive house on the block to flaunt your high status in life, go to an exorcist immediately. Don’t succumb to the blandishments of the evil spirit unless the probability of losing money when you sell fills you with joy. Satisfy your ego — and make a wiser investment — by purchasing one of the less expensive homes in a better neighborhood.

That new kitchen almost certainly won’t increase your home’s value to $350,000. No one can dispute the fact that you spent $50,000 on the kitchen if you have the receipts to prove your expenditures. But folks who buy $350,000 homes generally want to be surrounded by other homes worth as much as, or more than, the one they’re buying.

Homes are like cups. When you fill a cup too full, it overflows. By the same token, when you make excessive improvements to your house (based on sale prices of comparable homes in the neighborhood), the money you spend on the rehab goes down the financial drain. This phenomenon is called over-improving a property.

Even if you buy the least expensive house in the neighborhood, you can over-improve it if you spend too much fixing it up. The best time to guard against over-improving your house is before you do the work.

If you’ll end up with the most expensive house on the block when you finish a project, don’t do the project.

The principle of conformity: Why unusual is usually costly

The principles of progression and regression deal with economic conformity. If you want to maximize your chances for future appreciation of the home you buy, your home should also conform in size, age, condition, and style to the other homes in your neighborhood. That’s the principle of conformity.

This principle doesn’t mean that your home has to be an identical clone of every other house on the block. It should, however, stay within the prevailing standards of your neighborhood. For example:

Your home doesn’t have to be a bland, boring replica of every other house on the block. You can follow the principle of conformity and still express your individuality by the way you landscape, paint, and furnish your home. You know you’ve done well when people use words like “tasteful” and “exquisite” to describe your home. On the other hand, your decorating motif is a problem if folks refer to your house as “weird” or “eccentric.”

Tony Martin, B.Comm, is a nationally-recognized personal finance, speaker, commentator, columnist, management trainer, and communications consultant. He is the co-author of Personal Finance For Canadians For Dummies.