The Parts of a Chicken's Head and Neck

By: Kimberly Willis and Robert T. Ludlow and
Updated: 06-11-2021
From The Book: Raising Chickens For Dummies

Explore Book Buy On Amazon
The most significant parts of a chicken’s head are the comb, the eyes and ears, the beak and nostrils, and the wattles and the neck. Following is a closer look at each of these parts, from the head down.

At the very top of the chicken’s head is a fleshy red area called the comb. The combs of Silkie chickens, a small breed, are very dark maroon red. Both male and female chickens have combs, but they’re larger in males.

Baby chicks hatch with tiny combs that get larger as they mature. The shape of the comb may not be totally apparent in a young chicken, but you should be able to tell whether the comb is upright, rose-combed (a crumpled-looking comb tight to the head), or double. 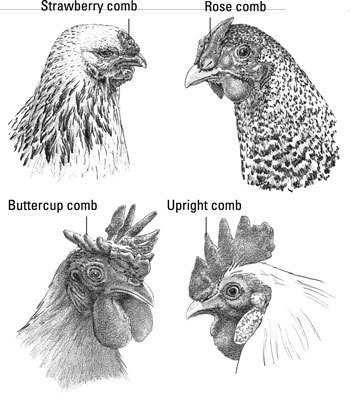 Credit: Illustration by Barbara Frake
Different breeds have different types of combs. Depending on the breed, the comb may be floppy, upright, double, shaped like horns, or crumpled and close to the head.

These differences in combs are a result of breeders selecting for them. Chicken breeds with small combs close to the head were often developed in cold countries. Large combs are prone to frostbite in cold weather, and parts of them may turn black and fall off. Conversely, large, floppy combs may help chickens cool down in hot, humid weather.

The comb acts like the radiator of a car, helping to cool the chicken. Blood circulates through the comb’s large surface area to release heat. The comb also has some sex appeal for chickens.

The eyes and ears of a chicken

Moving on down the head, you come to the chicken’s eyes. Chickens have small eyes — yellow with black, gray, or reddish-brown pupils — set on either side of the head. Chickens, like many birds, can see colors. A chicken has eyelids and sleeps with its eyes closed.

Chicken ears are small openings on the side of the head. A tuft of feathers may cover the opening. The ears are surrounded by a bare patch of skin that’s usually red or white. A fleshy red lobe hangs down at the bottom of the patch. In some breeds, the skin patch and lobe may be blue or black. The size and shape of the lobes vary by breed and sex.

If a chicken has red ear skin, it generally lays brown eggs. If the skin patch around the ear is white, it usually lays white eggs. A chicken may occasionally have blue or black skin elsewhere, but the skin around the ear will still be red or white. This coloring can help you decide whether a mixed-breed hen will lay white or brown eggs, if that’s important to you.

Three breeds lay blue or greenish eggs: the Araucana, the Ameraucana, and the Easter Eggers. Those breeds have red ear-skin patches.

The beak and nostrils of chickens

Chickens have beaks for mouths. Most breeds have yellow beaks, but a few have dark blue or gray beaks. The lower half of a chicken’s beak fits inside the upper half of the beak. When the bird is breathing normally, you should not see a gap where daylight shows between the beak halves. Also, neither beak half should be twisted to one side.

A bird’s beak is made of thin, hornlike material and functions to pick up food. Beaks are present on baby chicks, and a thickened area on the end of the beak, called the egg tooth, helps them chip their way out of the eggshell. Chickens also use their beaks to groom themselves, running their feathers through their beaks to smooth them.

Chickens don’t have teeth, but inside the beak is a triangular-shaped tongue. The tongue has tiny barbs on it that catch and move food to the back of the mouth. Chickens have few taste buds, and their sense of taste is limited.

At the top of the beak are the chicken’s two nostrils, or nose openings. The nostrils are surrounded by a raised tan patch called the cere. In some birds, the nostrils may be partially hidden by the bottom of the comb. Birds with topknots have much larger nostril caverns. The nostrils should be clean and open. A chicken’s sense of smell is probably as good as a human’s, according to the latest research.

The chicken's wattles and neck

Under the beak are two more fleshy lobes of skin, one on each side. These are called the wattles. They’re larger in males, and their size and shape differ according to breed. The wattles are usually red, although in some breeds, they can be blue, maroon, black, or other colors.

The neck of the chicken is long and slender. It’s made for peeking over tall foliage to look for predators. The neck is covered with small, narrow feathers, called hackle feathers, that all point downward.

Kimberley Willis has raised numerous breeds of chickens and other poultry for eggs, meat, and showing for more than 40 years.

Robert T. Ludlow owns and manages BackYardChickens.com, the largest and fastest-growing community of chicken enthusiasts in the world.