How Do Photovoltaic Cells Convert Sunlight into Electricity?

Solar energy is leading the green revolution. If you're considering installing a solar photovoltaic (PV) system on your home, you don't need to know how the PV cells work. Your solar contractor knows the details, and they know which types of panels to use in a given application.

But PV systems cost a lot of money, and customers are generally interested in knowing as much as possible about the details. The more you understand, the better your own decision-making process will be.

A standard PV cell is a thin semiconductor sandwich, with two layers of highly purified silicon. Photovoltaic arrays are nothing more than huge matrices of interconnected semiconductor sandwiches. Usable PV systems comprised all sorts of equipment that protects the user from electrical shock, stores the electricity in battery banks, and converts the direct current (DC) into alternating current (AC), which is what people use in their houses. But at the heart of each system is a simple conversion process. 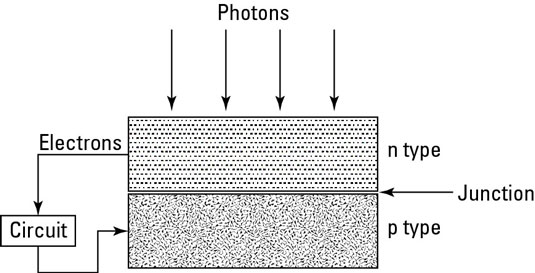 A basic cell is around 1/100th of an inch thick, with a wide range of surface areas. A typical life span is over 25 years, and there are cells in place that have produced electricity reliably for over 40 years. This longevity is ultimately due to the coatings and framing structures that protect the cells.

A module is an assembly of individual cells, connected in series and parallel arrangements designed to yield optimum performance. 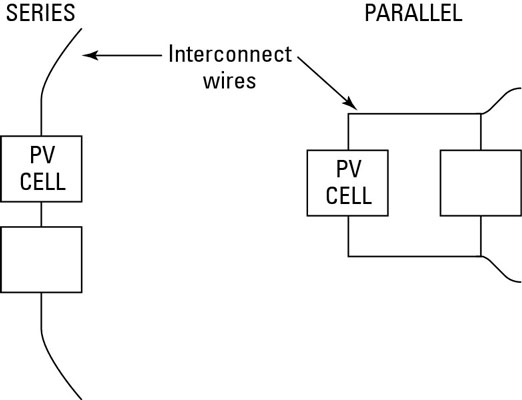 A typical PV cell produces around half a volt of electrical output. When 36 PV cells are connected in series, the result is an 18-volt module. A module or panel is a number of individual cells interconnected and housed into a finished product. A typical PV module in a residential application measures around 2.5 feet by 5 feet, in either bluish or black. Frames are either aluminum-colored or black, with the latter being the overwhelming choice of most homeowners these days (they just look better).

It's possible to achieve a wide range of voltage and current outputs, depending on how the individual cells are connected together. The amount of power a module can produce is a function of the total surface area, as well as the amount of sunlight that strikes the module.

Typical modules are rectangular and are available in a variety of sizes and configurations. Small modules (the kind used in hand-held calculators) output less than a single watt of power, while a typical residential module produces around 200 watts of power, more or less.

Modules are characterized by:

The most important feature of a cell is the composition of the silicon structure. Single crystalline cells may be cast into an ingot of multiple crystals. Or the crystalline materials may also be deposited as a thin film, which is referred to as amorphous silicon.

Individual silicon wafers used to manufacture PV cells are embedded with metallic contacts (wires). The cells are coated with an anti-reflection material so that the maximum amount of sunlight is absorbed into each cell.

Single crystalline cells are more efficient than polycrystalline because, in polycrystalline cells, inter-grain boundaries introduce resistance to current flow (which consumes energy). Amorphous silicon is much less expensive to manufacture, but it's only around half as efficient in converting sunlight into useable electrical energy. In practical terms, this means that an amorphous system requires twice the surface area to output the same amount of power. Depending on how much surface area is available, this may or may not be a problem. In most residential applications, suitable roof space is limited, so efficiency is an important factor.