By: Charlie Nardozzi and The Editors of the National Gardening Association and
Updated: 03-26-2016
From The Book: Vegetable Gardening For Dummies, 2nd Edition 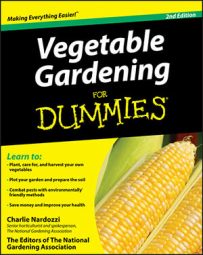 When making a container garden, you fill pots with soil, stick in the plants, and add more soil. Here are some tricks to container gardening outdoors that'll help you grow healthy vegetables and ornamentals and save a bit of money, as well.

The National Gardening Association is the leading garden-based educational organization in the United States. Visit http//:garden.org.

The National Gardening Association offers plant-based education in schools, communities, and backyards across the United States, through the award-winning websites garden.org and kidsgardening.org.