Urban Farming: How to Determine Your Soil Type 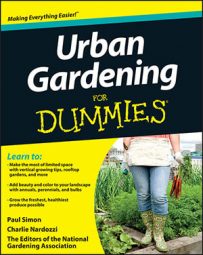 When talking soil, a little knowledge goes a long way. And most important for urban farmers is recognizing your soil type and its health. Some soils are naturally fertile and need little altering, but others need an overhaul. Knowing where you stand with your soil helps you determine what fertilizers and amendments you need to add before you get started.

Urban soils have special considerations you need to know about. Certain contaminants like lead and other hazardous substances are potential pollutants in some city soils. Testing can tell you whether you have any cause for concern. Luckily, if your soil has elevated toxic levels, many tips and techniques can help fix the contaminated soil and build it back to optimum health.

Just like plants and people, soils have different characteristics that make them unique. Knowing the kind of soil you have helps you determine its strengths and weaknesses. While soil is composed of many elements, the place to begin is with your soil type. You just have to observe the composition of the soil’s particles.

The following three types of particles can make up your soil:

Most soils are a combination of these three particles, but the particle type that dominates dictates many of the properties of your soil.

The ideal soil is 40 percent sand, 40 percent silt, and 20 percent clay. You’ll hear this mixture referred to as loam. It takes the best from each soil particle type. It has good water drainage and allows air to infiltrate the soil like sand, but it also holds moisture well and is fertile like silt and clay.

Loam is the ideal, but if your soil falls a little short, don’t worry. Through the addition of organic matter, you can create a loamier soil that has all the attributes you desire.

How to determine your soil type

Take a handful of damp soil and make a ribbon by rolling the soil between your hands.

The jar test is for the scientists in the crowd. It’s a bit more precise than the other tests. To do this test, take soil from a number of places in your garden and mix the samples together in a bucket. Scoop up a cup of your soil and follow these steps: