How to Deal with Common Garden Diseases

By: Ann Whitman and Suzanne DeJohn and The National Gardening Association and
Updated: 03-26-2016
From The Book: Organic Gardening For Dummies 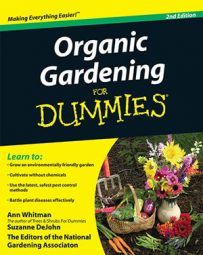 Many names of plant diseases describe the symptoms they cause, such as powdery mildew, leaf curl, and club root diseases. Some diseases attack only one plant part, whereas others can affect the entire plant.

The following list describes some of the most common garden diseases:

Ann Whitman is the author of the first edition of Organic Gardening For Dummies.

Suzanne DeJohn is an editor with the National Gardening Association, the leading garden-based educational nonprofit organization in the U.S. NGA's programs and initiatives highlight the opportunities for plant-based education in schools, communities, and backyards across the country. These include award-winning Web sites garden.org and kidsgardening.org.

The National Gardening Association (NGA) is committed to sustaining and renewing the fundamental links between people, plants, and the earth. Founded in 1972 as “Gardens for All” to spearhead the community garden movement, today’s NGA promotes environmental responsibility, advances multidisciplinary learning and scientifi c literacy, and creates partnerships that restore and enhance communities.
NGA is best known for its garden-based curricula, educational journals, international initiatives, and several youth garden grant programs. Together these reach more than 300,000 children nationwide each year. NGA’s Web sites, one for home gardeners and another for those who garden with kids, build community and offer a wealth of custom content.