How to Grow Potatoes

By: Sven Wombwell and
Updated: 03-26-2016
From The Book: Allotment Gardening For Dummies 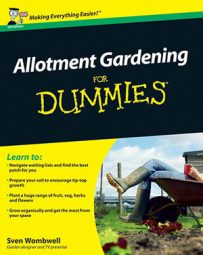 There are various ways to grow tasty, nutrient-packed potatoes, all of which are reasonably easy and straightforward. Choose the variety that works best for you and follow these instructions for the perfect crop of root vegetables.

Potatoes can be grouped according to how long they take to mature. There are three types – early, second early and main crop. If you grow a selection of all three, you can harvest potatoes from June to October.

Chitting to start a potato crop

Never plant shop-bought potatoes – you risk introducing diseases to your plot. Buy seed potatoes, which you can either plant directly or chit beforehand.

Chitting calls for placing seed potatoes in a cool, dry, light place for a couple of weeks before planting them in the ground. This important step allows them to start sprouting, which will help produce a better crop.

If you suspect frost, cover the new shoots with a layer of soil or shredded newspaper. Make sure that tubers are not exposed to light, as this will cause them to become inedible. Keep potatoes moist once they’ve become established, or the roots might split.

Weed crops thoroughly, making sure that annual weeds are pulled out in the first weeks after planting your potatoes. Earth up your plans up at least a few times during the growing period. To do this, use a rake, hoe or spade to build up soil gently over the developing shoots. This protects them from frost and encourages higher yields.

This is a very simple way to grow potatoes. The advantages are that it eradicates slug problems and can help keep diseases like blight at bay.

When and how to harvest a potato crop

Harvest first earlies when the flowers have opened. Earlies should be lifted as close to eating as possible, because they’re still growing and full of carbohydrates which deteriorate quickly. Second earlies can be left as late as September, while mains should be lifted once the foliage has died back. Lift potatoes carefully using a fork. Be careful when using the fork: if you stab any spuds they will rot quickly.

Sven Wombwell is a garden and allotment expert. He starred in BBC1's Garden Invaders series, presenting with Charlie Dimmock, and has featured on GMTV, This Morning and UKTV Style Gardens, amongst other programmes. Alongside his media commitments, Sven designs gardens around the globe.