Creating the Water-and-Ice Effect in Minecraft

One neat thing about Minecraft is that some realistic physics are at play within the game. For example, if you have water and you put ice in it, it starts to freeze!

Okay, maybe in the real world, adding ice doesn’t make water freeze, but it does make it colder.

You can check out this cool effect in the Minecraft simulator at the LearnToMod site. When you open the inventory, you can see that you have ice as one of the blocks you can use.

Ice is already an option.

Remember that you can access the inventory by pressing the E key while in the simulator or in Minecraft.

The ice block in the Minecraft simulator has an interesting effect when it comes into contact with water: It progressively starts freezing the water. A water block that is in direct contact with ice freezes and is turned into an ice block as well. The new ice blocks continue to have the same effect on the surrounding water blocks until all the water has been frozen.

As you can see, the ice block to the right of the player was placed on top of the water. Starting from the original ice block, all the water will continuously freeze. 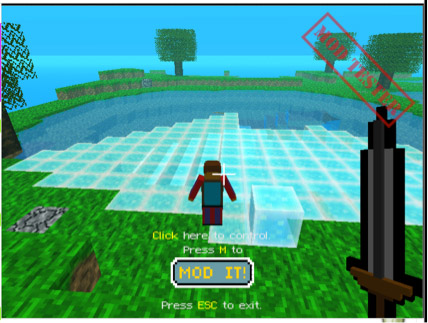 Making your water freeze into ice is easy.

You should notice that water blocks behave similarly to liquids in real life, by spreading across surfaces and flowing around obstacles. In the simulator, placing a single water block serves as a water source that has an outcome much like leaving the water hose running outdoors: The water continues to spread until it hits a wall or can’t fall any longer.

Adding ice and water to mods

The freezing effect is fun to play with when you find a large water source, such as the lake. But you can increase this effect even further, when you combine water and ice in your mods.

In the following chunk of code, a row of water blocks is being placed ten blocks high that will serve as a long water source: 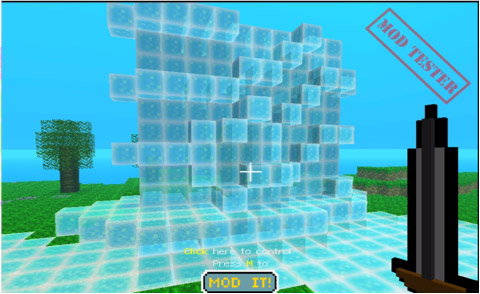 Ice blocks are an easy addition to your mods.

As the water begins to work its way down, it begins to look like a waterfall. Directly where the water meets the ground, a single ice block is placed. When the ice block comes in contact with the water, the waterfall slowly freezes and creates an ice wall. 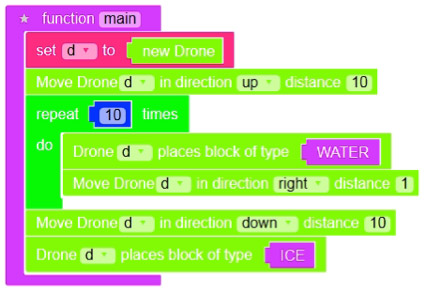 Code for your ice wall.

Notice that when falling water freezes, its shape begins to morph and expand. These actions can be used to create some truly unique art pieces.

As an extra challenge, create your own frozen art. For example, here are some ideas to spark your creativity:

The key is to be creative with different block types to make your Minecraft experience unique and exciting.