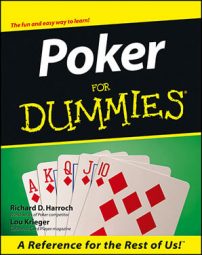 Explore Book Buy On Amazon
Whether you play poker for fun or money, you can use bluffing strategies and the rules of etiquette for games at home. If you play for money, tips for managing your poker chips may come in handy.

When you’re playing poker in your home or someone else’s, the rules of etiquette are mostly commonsense conventions and normal poker protocols. Following, are a list of things to do and things to avoid during a friendly game at home:

As a poker player, you know that a poker game theoretically never ends. The tips in the following list are suggestions to keep in mind to manage your poker-playing funds:

Bluffing is a well-established and time-honored poker strategy. The next time you’re inclined to attempt that particular type of larceny at the poker table, keep these bluffing tips in mind: