How to Play the Card Game Accordion

Explore Book Buy On Amazon
The card game Accordion is also known as Methuselah, Tower of Babel, or Idle Year (presumably because of the amount of time you need to keep playing the game to win it).

Accordion is a charmingly straightforward game that can easily seduce you into assuming that it must be easy to solve. Be warned — we've never known anyone who has completed a game of Accordion! This challenge makes success at the game doubly pleasurable.

Accordion also takes up very little space — a major benefit because you tend to play Solitaire in a cramped space, such as while waiting in a bus station or an airport gate.

The objective of Accordion is to finish up with a single pile of 52 cards. Relative success is reducing the number of piles to four or fewer. Your chances of complete victory may be less than 1 in 1,000, but don't let that deter you from giving this game a try! The fact that it is a very fast game to play means that you can abandon unpromising hands and move on to another without wasting much time.

Looking at the layout

The layout for Accordion is simple. Follow these steps to begin your long journey:

Shuffling the deck well is important because you work your way through the deck one card at a time, so you don't want to make the game too easy by having all the diamonds coming together, for example. That would spoil your sense of achievement, wouldn't it?

Your initial cards may look like one of the examples shown here after you lay out three cards.

At the start of Accordion, your cards may fall in this manner.

To see how you can combine cards placed three piles away from each other, look here. 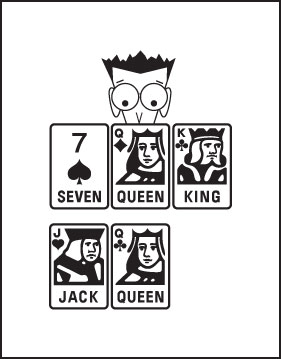 You can match cards that are three places away from each other to further your game progress.

Laying the cards out in lines of three helps ensure that you properly identify the cards that are three piles apart.

When moving the cards, you frequently have to be careful to make the plays in the correct order to set up more plays. You may have a choice of moves, but you may not be sure which move to execute first. Look at a possible scenario shown here. 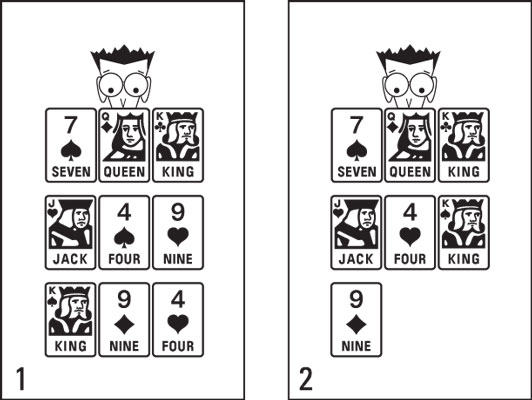 Look ahead to see which move to make first.

Making an available play isn't always mandatory. When you can choose between possible moves, play a couple more cards to help you decide which move is superior. The figure shows you how waiting can help you make up your mind when you have a choice. 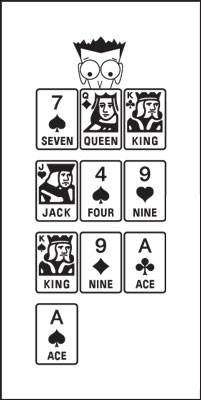 Playing the waiting game can help you make up your mind.

At this point, you may not know whether to put the ace of spades on the ace of clubs or on the king of spades because your piles don't indicate whether you should keep aces or kings on top of your piles.

If several piles have kings on the top, you may want to avoid hiding the king of spades. Instead of jumping the gun, you turn over another card to see what happens, which turns out to be the jack of spades.

Play continues until you end up with one pile of cards — good luck!

Jason Dodds is an Autodesk Construction Solutions Engineer who has been actively involved in all facets of design and building processes for over 15 years and has been using Navisworks since the software's inception. Scott Johnson is an Autodesk Sr. Technical Account Manager and an early adopter of Navisworks who has over 15 years of experience in design, construction, digital prototyping, and manufacturing. Both authors consult internationally and speak regularly at Autodesk University (AU) and other industry events.