Explore Book Buy On Amazon
Whenever the dummy presents you with a five- or six-card side suit, you may have a chance to turn one or more of the small cards in that side suit into winning tricks. What you have to do is play the suit and keep playing the suit, trumping one or two of those small cards in your hand, until both opponents are void in the suit (in other words, they have no cards left in the suit).

To turn small cards in long suits into winning tricks, here’s what you need:

This image shows a hand in which the three needed requirements come into play, allowing you to establish the dummy’s side suit. 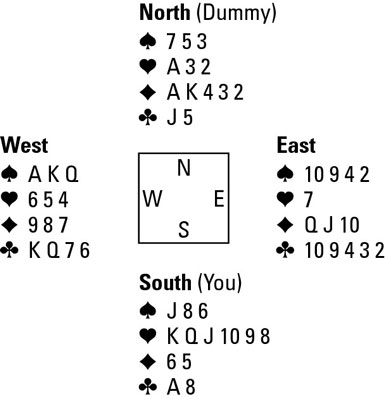 You and your partner determine during the bidding that your trump suit is hearts, and you contract for ten tricks. West leads the ♠A.

If you need to take ten tricks, you can afford to lose three tricks. See whether you have more than three losers, and if you do, whether you can get rid of some of those losers.

Take a look at your loser count for this hand:

You need to win ten tricks, but you have four losers in your hand — one too many to make your contract. The potential answer to your club loser is that five-card diamond suit. You need to turn one of those little diamonds into a winning trick and then use that established diamond to discard your losing 8.

Playing the long suit to the bitter end

West begins by taking the first three spade tricks with the ♠AKQ, and then switches (smartly) to the K, driving out your A and turning your 8 into an immediate loser. Fortunately, you have the lead, and you also have a five-card diamond suit to work with. You want to establish the dummy’s long suit (make at least one of the small cards there into a winner), so you have to play the suit and keep playing it until both of your opponents run out of diamonds:

After you establish your small cards, you can’t use them until you draw all your opponents’ trumps. Your opponents have four hearts between their two hands. Your plan of attack is to lead hearts three times, removing each and every heart from your opponents’ hands.

Keep a high card in the dummy either in the trump suit or in a side suit so you can reach your established tricks after you’ve drawn trumps. You have only the ♥A as a way to reach those beautiful diamonds, so for heaven’s sake, don’t play the ♥A until the last possible moment.