Explore Book Buy On Amazon
Most of the responder’s rebidding headaches arise after an initial one-over-one response, followed by the opener mentioning a second suit. At that point, three bids have been made, and neither player has made a limit bid. Both hands have problems determining each other’s strength.

However, if the initial response is two over one, the opener already knows of 11 or more HCP, eliminating the possibility that you (the responder) have a weak hand. The responder figures to have a hand that fits into one of the following ranges:

The examples here show you how the responder defines her hand after a two-over-one response. Remember, the responder already has shown at least 11 HCP. 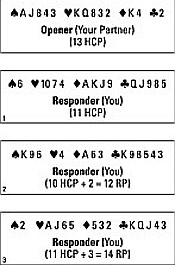 The responder completes the picture after the two-over-one response.

The bidding for this hand has gone as follows:

You must make a rebid because a two-over-one response promises a second bid (unless game has already been reached). In addition, both hands are unlimited. No one has rebid a suit, raised a suit, or bid notrump, so the traffic light is set firmly on green.

Ask yourself what you know about the opener’s hand. So far, she has given you the following information:

What does your partner know about your hand? So far, you have revealed the following details:

In the first responding hand above, rebid 2NT, showing 11 to 12 HCP. Notice that you can rebid 2NT with a singleton in your partner’s first-bid suit. When you don’t like either of your partner’s suits and you need to bid again, bidding notrump is often an option.

After you make a two-over-one response, your partner already knows that you have at least 11 HCP. With 11 or 12 HCP, don’t do any jumping — just make a minimum rebid.

Also, many people play that a two-over-one response promises a second bid unless game has been reached. Many others play it forcing to game, no matter what called, playing “two-over-one,” and they swear by it. Something to discuss with partner.