How to Recognize Bridge Losers

Get ready for some good news: When counting losers, you have to count only the losers in the long hand (the hand that has more trumps). The declarer usually is the long trump hand, but not always.

You help yourself by knowing which of your losers are eventual and which are immediate. Your game plan depends on your immediate loser count.

Take a look at the spades in the three images to spot some losers. Assume in these images that spades is a side suit (any suit that’s not the trump suit) and hearts is your trump suit.

The following image shows a suit with two eventual losers. As long as you have the ♠A protecting your two other spades, your two spade losers are eventual. However, after your opponents lead a spade (which forces out your ace), your two remaining spades become immediate losers because they have no winning trick protecting them. 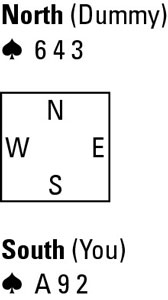 In the following image, you have one eventual spade loser. The dummy’s ♠AK protect two of your three spades — but your third spade is on its own as a loser after the ♠A and ♠K have been played. 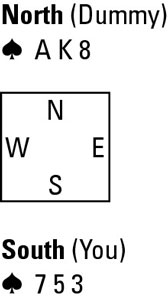 In this final image, you have two immediate spade losers. Notice that you count two, not three, spade losers — you count losers only in the long trump hand (which presumably is your hand). You don’t have to count losers in the dummy. 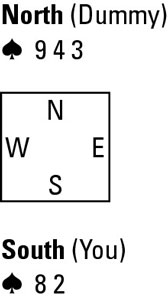