How to Overtake One Honor with Another in Bridge

When you’re taking tricks in a hand of bridge, sometimes you can’t afford to be miserly with your honor cards. With equal honors between the two hands, you may have to play two honors on the same trick (overtaking one with another) to wind up in the hand with the greater length. It hurts only for a little while.

This image shows you what you have to do. To take three tricks in this round, you lead the king to reach the dummy. 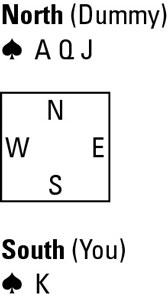 At notrump, your goal is to take three spade tricks:

If you don’t overtake the the ♠K with the ♠A, you may not be able to reach the dummy in another suit to take the other two spade tricks. Greed and miserliness will beat you.

This image shows another example of where stinginess strikes out. 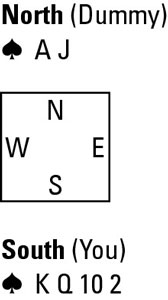 At notrump, you want to take four spade tricks:

If you play the ♠10 under your jack (ugly!), you’re stuck in the dummy and may not be able to reenter your hand in another suit to take your remaining spade winners.