How to Duck a Trick in Bridge

Explore Book Buy On Amazon
No need to quack if you're ducking a trick in a game of bridge. When you know you have to lose at least one trick in a suit that includes the ace and king, face the inevitable and lose that trick early by playing low cards from both your hand and the dummy. Taking this dive early on is called ducking a trick.

Ducking a trick is a necessary evil when playing bridge. A ducking play in a suit that has an inevitable loser allows you to keep your controlling cards (the ace and the king) so that you can use them in a late rush of tricks.

When you duck a trick and then play the ace and king, you wind up in the hand that the small cards belong to — just where you want to be.

When you have seven cards between the two hands

The cards in this hand show how successful ducking a trick can be: 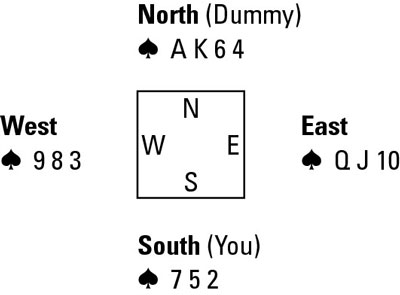 You have seven cards between the two hands with the ♠AK in the dummy — a perfect setup for ducking a trick. You can only hope that your opponents’ six cards are divided 3-3. To find out, you have to play the suit three times.

After you concede the trick with the ♠2 from your hand and the ♠4 from the dummy, you can come roaring back with your big guns, the ♠K and the ♠A, when you regain the lead. Because your opponents’ spades are divided 3-3, that little ♠6 in the dummy takes a third trick in the suit — neither opponent has any more spades.

When you have eight cards between the two hands

If the dummy has a five-card suit headed by the ace and the king facing three small cards, you can usually take two extra tricks with a ducking play. In this image, you make a ducking play, and then watch the tricks come rolling in. 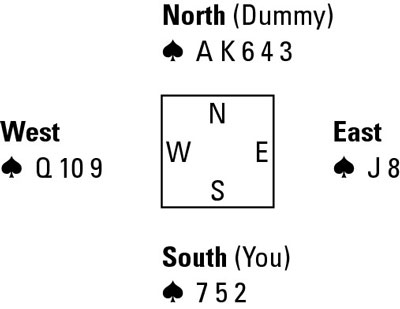 The opponents have five spades between the two hands, including the ♠QJ. You have to lose a spade trick no matter what, so lose it right away by making one of your patented ducking plays: