How to Avoid Blocking a Suit in Bridge

Explore Book Buy On Amazon
If you don’t play the high honor(s) from the short side of your bridge hand first, you run the risk of blocking a suit. You block a suit when you have winning cards stranded in one hand and no way to enter that hand in order to play those winning cards. It’s too sad for words.

This image shows you a suit that’s blocked from the very start. It features a bridge tragedy: seeing the dummy come down with a strong suit, only to realize that it’s blocked and you can’t use it. You have five spade tricks, but may be able to take only two. After you play the ♠AK, you’re fresh out of spades, and the dummy remains with the ♠QJ10. 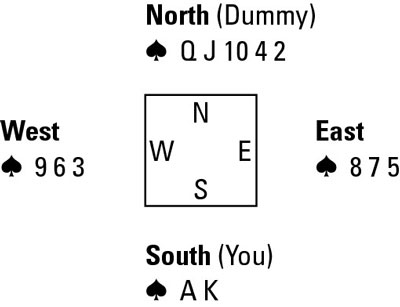 If you don’t have an entry (a winning card) in another suit to get over to the dummy, the dummy’s three winning spades will die on the vine.

The more poignant tragedy is when you block a suit by failing to play the high card(s) from the short side first. Then you wind up in the wrong hand: Instead of the long hand where the winning tricks are, you end up in the short hand with no more cards in the suit. Your partner’s winning tricks may die on the vine if you can’t enter your partner’s hand in another suit to take them.

Here’s a story of blocking your own suit: In what was a high-stakes game, North was the pro playing with one of the weaker players at a swanky London bridge club. The pro didn’t aim to win when playing with this young man — that was impossible — but to hold his losses to as little as possible. The pro tried to arrange the bidding never to let his partner play a hand if he could help it.

Then came the ill-fated hand to end all hands, shown in this image. Going against his better judgment, the pro allowed his partner to play the hand. The final contract was for nine tricks. 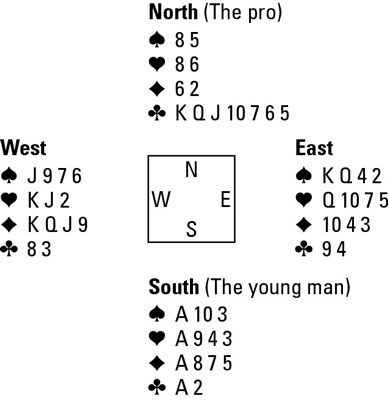 The opening lead was the ♦K. The pro put down the dummy and took a peek at his partner’s hand. His partner was actually going to take ten tricks: seven clubs (by playing the ♣A from the short side, and then a low club to the dummy’s ♣10, followed by five more winning clubs) plus three other aces. The pro was going to win a bundle. Unheard of! He returned to his seat to enjoy the hand and also to image out how many pounds he was about to win.

Here’s what happened: After playing the ♣2 and winning the trick in the dummy with the ♣10, the young man led a low club from the dummy back to the ♣A in his hand. Unfortunately, the dummy now held five — count ’em, five — winning clubs. Poor South had no more clubs in his hand and no way to get to the dummy in another suit (rendering all the remaining clubs in North’s hand worthless). The inexperienced young man had blocked the club suit and compressed seven club tricks into only two club tricks.