It wasn't until 1886, in a match versus Johann Zukertort, that a winner was officially given the title of world champion. Steinitz won with a score of ten wins, five losses, and five draws. He then successfully defended his title several times before losing, at the age of 58, to the young Emanuel Lasker.

In a world championship match game against the great Russian player Mikhail Chigorin played in 1892 in Havana, the position in part a is reached after the 23rd move of the game. 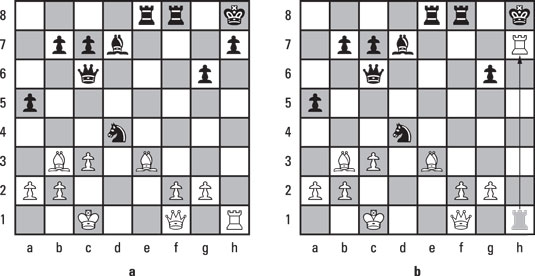 Steinitz finishes Chigorin off with 24. Rxh7+.

The obvious move for Steinitz, as white, would have been to play 24. Bxd4+, but that would have allowed black to fight on with 24… . Rf6. Instead, Steinitz administered the coup de grace with 24. Rxh7+.

Sacrificing such a large amount of material is counterintuitive to most players.

The game concludes with the following moves: