Building a Better Player: A Brief History of Computer Chess

Explore Book Buy On Amazon
One of the very first challenges that computer programmers took on was the creation of chess programs, because they saw chess play as one of the ultimate challenges in computer applications.

First, programmers had to decide on the best approach to simulate chess play. Then, as new technologies exploded on the scene, chess programs evolved accordingly. A couple of landmarks are particularly notable. 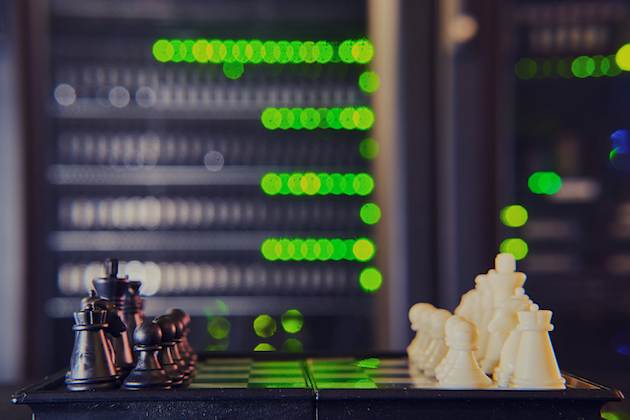 During the early days of computer development, chess was considered the ideal application for artificial intelligence (AI). The reasoning was that if someone could create an AI application to play chess like a human does, scientists' understanding of how the human mind works would dramatically increase. At that point, other simulations would be possible, or so the thinking went.

However, computers really don't think the way humans do, and the emphasis in computer chess eventually shifted from playing a chess game as a human would to simply playing as well as possible.

The early AI approach was to use what were called heuristics, whereby computers would play by using certain rules of thumb — what chess players like to call general principles — to try to map out the game the way a human would. The downside of this method was that it turned out to be very difficult to write programs to make computers "think" like humans.

A different method programmed the computer simply to analyze as many moves and variations as possible, as far ahead as possible. This approach was the number-crunching method — what programmers call brute force. The disadvantage of this technique was that the computer wasted time looking at silly moves a human wouldn't even consider.

Early on, both approaches seemed equally valid because both led to equally bad play. Soon, however, with the development of integrated circuits (ICs), or chips, the speed of modern computers increased many times over, and brute force triumphed.

Nowadays, little effort is made to have a computer play like a human would play. Instead, programmers simply try to calculate as many positions (or ply in computer-speak) as possible, with some heuristics to give a bit of guidance to the search.

At the time of this writing, even commercially available chess programs on a home PC can analyze millions of moves per second!

Looking at landmarks in development

One computer landmark for chess players took place back in 1977, before PCs were everywhere. People could buy a chess set with a built-in computer that was ready, without complaint, to play any time. Dubbed Chess Challenger I, this stand-alone chess computer was developed by businessman Sidney Samole, who was inspired by a game of 3D chess (don't try this at home!) between Captain Kirk and the Enterprise's on-board computer in the original Star Trek series.

Samole loved playing chess but he didn't have the time for a game when other people were available. Chess Challenger I was a big hit, even though it didn't really play very well.

Before long, competitors emerged and began developing chess computers that played much better. These computers looked very much like chess sets with extra-thick boards, and you could buy them in department stores. You could even adjust their playing strength, because playing someone — or, in this case, some chip — that's a lot weaker or a lot stronger than you doesn't provide as much training as playing someone whose ability is closer to your own.

Another computer chess milestone took place in the 1990s. Garry Kasparov — who, in my opinion, is the greatest chess player in history — played two matches against IBM's Deep Blue, which, running on a mainframe supercomputer, was the best chess-playing program at the time. When Deep Blue won the second match, a great deal of hand-wringing ensued. This loss wasn't one for humanity, as many believed, but rather was a triumph of research and engineering.

Then came the widespread availability of PCs and the rapid development of the internet, and buying a special machine to play chess against became a thing of the past.

Today, inexpensive and even free chess programs that can routinely defeat even the very best players run on the average household PC, and websites that allow you to play chess with anyone in the world online have proliferated. Now, you can play chess any time, day or night, on a moment's notice, without leaving your chair.