Examining Different Levels of Competition at the Racetrack

By: Richard Eng and
Updated: 03-26-2016
From The Book: Betting on Horse Racing For Dummies

Betting on Horse Racing For Dummies 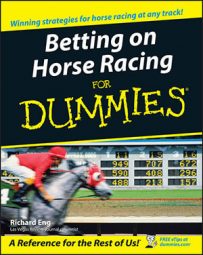 Just as all horse races are not created equal, neither are all horses. However, racetracks overcome this inequality as best they can by pitting horses of similar ability together for various races. This practice is known as parity.

To envision how the horse races are planned by the racing secretary's office, think of a pyramid. (The racing secretary is the person in charge of writing the races, assigning weights in handicap races, assigning the number of stalls to trainers, and so on). Each level of the pyramid is a class level. At the base of the pyramid are the maiden horses, horses that have never won a race. At the top of the pyramid are the very best horses, called the stakes horses. These top horses run in stakes races, which offer the most prize money, called purses.

In between are the layers of horses that run in claiming races — where horses can be bought — and non-selling races. Non-selling races come in three types — allowance, optional claiming, and starter handicap races. The goal of the racing office is to write competitive races with full fields of horses. And the goal of the horses is to become stakes horses, but they must win their way up the class ladder, which is called winning through their conditions. Conditions are the eligibility requirements of a horse running in a race, such as age, sex, number of wins, and amount of money won.

Horse racing would be awfully boring, and practically unbettable if in every race, one horse is so dominant over the rest of the field that he goes off at 1/5 odds, wins, and pays $2.40.

Read on to understand how a racing office puts together the horse racing product that you handicap and bet on regularly.

Maiden races: Where it all begins

Each year, more than 35,000 Thoroughbred racehorses are foaled (born). Every foal starts out with the hope that he or she may become a future champion. The reality, however, is that some racehorses are destined for a much brighter future than other racehorses, due to pedigree and training. Every young horse does have one thing in common, though: They all begin as maidens, meaning they've never won a race.

One thing to remember as a budding handicapper is not to give up on young horses too soon. To catch long shot priced horses, you need to be a forgiving handicapper and forgive a bad race or two. Horses throw in clunker races now and then — especially maidens. To catch good mutuel prices, you need to forgive those bad races and project when the horse will run its best.

Horses run in maiden races to create a larger pool of winners for the next condition. After a horse breaks its maiden, it moves one step up the ladder towards the top of the pyramid to face winners that have broken their maiden and a whole new set of race conditions. Depending on the horse's abilities, it either moves on to claiming races or non-selling races.

Claiming races: Where every horse is for sale

The meat and potato races in horse racing are called claiming races. Every horse entered in a claiming race is eligible to be claimed, meaning bought out of the race. All you need is an owner's license in that state and money on deposit in a horseman's account. Presto — you can claim a racehorse.

Common sense rules in claiming races, so the competition remains fairly equal. For example, if you own a horse worth $30,000, and your trainer enters it into a claiming race for $10,000, chances are you'll win the race and have the horse claimed from you. The winning purse amount won't be enough to make up the difference of the value of the horse you just lost. In essence, you sold a $30,000 horse to another trainer for $10,000. Make enough negative cash flow transactions, and you'll soon be out of the horse-owning business.

Some of the best races to handicap could be called hard knocking veteran claimers. These are older claiming horses that keep running every few weeks. Usually, there are full fields to handicap because the class level is populated with a lot of horses. Depending on the price scale at the racetracks near you, it may be a $35,000 claimer in Southern California and New York, a $20,000 claimer in Kentucky and Florida, or a $10,000 claimer at Philadelphia Park and Mountaineer. This class level is around the median for those racetracks. You'll see a lot of geldings that run every few weeks and grind out purses for their owner and trainer.

You see a certain amount of gamesmanship among the owners and trainers in the claiming game. Claiming a bad-legged racehorse is like buying a lemon of a used car. You need to kick the tires a few times and check under the hood before you buy or bet. Most horses usually run to their true worth. Improving horses move up the claiming ladder, and those horses that don't show improvement drop in class.

Non-selling races: Another step up the ladder

If a horse that broke its maiden shows real promise, the preference is to skip the claiming races and move forward into non-selling races — races where the entrants can't be claimed. After all, the owner and trainer have a lot invested in each horse and want to protect that investment. Successful claiming horses can also move up to this level if their trainers and owners think they have a shot in this new category. The three categories of non-selling races are allowance, optional claiming, and starter allowance — allowance being the highest level within this category and starter allowance being the lowest.

Stakes and handicap races: The top of the pyramid

At the top of the horse pyramid are the best runners on the grounds — the stakes horses and handicap horses. These horses have gone up the ladder, breaking their maiden and winning through their allowance conditions, and now they're tackling the best horses at the racetrack. They also face invaders who ship in from other racetracks to try and steal a rich purse.

These are the kind of horses and races you see at the racetrack or OTB and on television in the feature races on weekends and holidays. The racing secretary cards overnight stakes, restricted stakes, non-graded stakes, and stakes graded 3, 2, and 1. These stakes horses are the crème de la crème, the kind you're willing to spend good money to see run.

Here are explanations and examples of each category of stakes race:

The top stakes are awarded a grading of 1, 2, and 3 to let everybody know what the most important races are. Every racing office has a person called a stakes coordinator assigned to recruit horses for these stakes. It's a matter of pride for racetracks to card a big stakes race and have the best horses in their region, and for that matter in the country, participate.

Richard Eng, a former researcher/writer for ABC Sports, has been involved in thoroughbred horse racing for more than 20 years. He currently hosts a radio show on horse racing.