By: Marni Wasserman and Amelia Jeanroy and
Updated: 03-26-2016
From The Book: Fermenting For Dummies 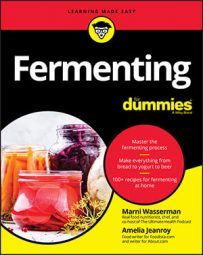 What does barley do for beer?

Barley’s responsible for giving beer its underlying flavor, its sweetness, its body, its head of foam, and its mouth feel — the textural qualities of beer on your palate and in your throat, such as viscosity (thickness), carbonation, alcohol warmth, and so on. Grains also contribute the natural sugars that feed the yeast, which converts the sugars into alcohol and carbon dioxide during fermentation.

The word malt generally refers to the natural maltose sugars derived from certain grains (mainly barley) that eventually become beer. Before you can brew with barley, it must undergo a process known as malting. The malting process, simply put, simulates the grain’s natural germination cycle.

Fortunately for homebrewers (particularly novices), you can make beer much more easily, without having to deal with grains. You can buy a product called malt extract, which has been nothing less than a boon to the homebrewing industry. (Some professional brewers use it, too.)

Malt extract comes in two distinct forms. One is liquid, which is quite thick and viscous, and the other is dry, which is a rather sticky powder. Dry malt extract has a longer shelf life because of a lack of water, while liquid malt ages faster and turns darker.

How do hops fit into the beer mix?

If malts represent the sugar in beer, hops surely represent the spice. As a matter of fact, you use hops in beer in much the same way that you use spices in cooking. The divine mission of hops is to accent the flavor of beer and, most important, contrast the malt’s sweetness. This spiciness, however, isn’t all hops have to contribute. Hops contribute five qualities to beer:

More than 70 recognized hop varieties exist, and each hop variety offers different nuances in bittering intensity, flavor, and aroma. The differences among them are often so subtle that even the most experienced brewers and beer judges are hard-pressed to recognize their individual attributes in a given beer — especially when you consider that brewers often use blends of different hops in a single batch of beer.

How and when you use the hops determines the effect they have on the finished brew. The longer you boil the hops, the more bitterness dissolves into the wort (up to a point). Boiling hops for 5 to 30 minutes imbues the beer with far less bitterness than the hops could potentially add, but you get some hop flavor.

Adding hops very late in the boil and boiling them for less than 5 minutes provides the beer with aromatics and little else. Many homebrew recipes tell you not only which hop varieties to use and in what quantities but also how long to boil them to get bittering, flavoring, or aromatizing characteristics from them.

Yeast: The key to fermentation

Although yeast is an ingredient that the average beer consumer rarely contemplates, brewers often consider it the most important ingredient. In fact, yeast can have a greater influence on the finished beer than any other single ingredient.

Yeast is a member of the fungus family. It’s a living, single-celled organism and one of the simplest forms of life. Because it has cell-splitting capabilities, it’s also self-reproducing. Yeast is the one ingredient responsible for carrying out the fermentation process in brewing.

Fermentation, simply put, is the natural conversion of sugar to alcohol. Yeast has a voracious appetite for sweet liquids. And, in exchange for a good, sweet meal, yeast produces equal amounts of ethanol (ethyl alcohol) and carbon dioxide.

A simple yeast cell consumes sugar (in liquid form) and in turn excretes alcohol and carbon dioxide, in addition to hundreds of flavor compounds. As part of the growth process, a single cell reproduces by cloning itself — splitting into two separate cells. Multiply this chain of events by billions, and you have fermentation.

Water is just one of the four primary ingredients used to make beer, but considering that it constitutes up to 95 percent of a beer’s total ingredient profile, water can certainly have a tremendous influence on the finished product. The various minerals and salts found in water used for brewing can accentuate beer flavors or contribute undesirable flavor components.

You can still make good beer with average tap water. Thousands of homebrewers are proving it every day. A general rule says, “If your water tastes good, so will your beer.” A caveat is important here, though: This general rule pertains solely to extract-based homebrews.