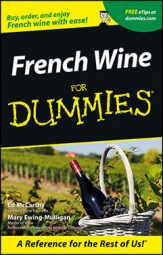 The Bordeaux region that produces France's famous red Bordeaux wines lies in the southern part of western France, on the Atlantic coast. The Gironde Estuary and its two major rivers, the Dordogne and the Garonne, run through the heart of the region.

Almost all of Bordeaux’s great wine estates are near the Gironde or one of its tributaries. The city of Bordeaux, France’s fourth largest city, lies in the center of the region (as depicted below). 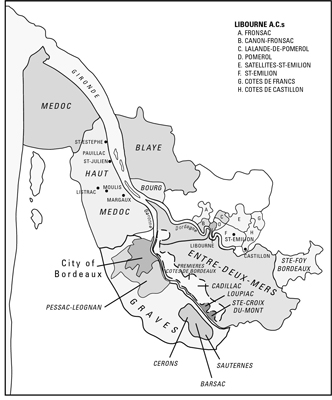 Bordeaux is a complex region, with many districts.

The Bordeaux area of France has a maritime climate, with damp springtimes, rather hot, fairly dry summers, rather mild winters, and quite a bit of rain during autumn and winter. When rain does occur in the fall, it often spells trouble for the vintage: Too much rain can turn a promising grape crop into a mediocre one.

Bordeaux’s landscape is rather flat in most places, and the soil is quite infertile. Not much else but grapes can grow there. In fact, the Bordeaux wine region — with the exception of the historic town of St.-Emilion — is plain looking. You don’t go there for its natural beauty.

But the Bordeaux region is a place worth visiting in the eyes of wine lovers, because it’s the home of more sought-after and expensive wines than any other region in the world. How has Bordeaux become the world’s most prestigious and most renowned wine region?

Bordeaux’s reputation as a great wine region rests on its most superb reds, legendary and long-lived wines made by historic wine estates (called châteaux), which can improve for several decades. About 75 to 80 percent of Bordeaux’s wines are red.

The greatest, most age-worthy red Bordeaux wines start at $30 a bottle retail, and can go up to about $800 a bottle and more for rare wines such as a newly-released Château Pétrus — with older, fine vintages of the greatest and rarest wines even more expensive. But the famous, costly wines make up only about 2 to 3 percent of all red Bordeaux.

Many fine Bordeaux reds are available in the $18 to $30 range; these wines are perfect for drinking when they’re five to ten years old. And lots of red Bordeaux sell for $8 to $18; these inexpensive wines are made to be enjoyed when they’re released at the age of two, up to five or six years of age.