By: Mary Ewing-Mulligan and Ed McCarthy and
Updated: 06-06-2016
From The Book: Italian Wine For Dummies 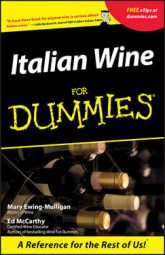 Sometimes ideas or stories take on lives of their own, and innocent Italian-wine lovers become unwitting believers in what are the wine equivalent of urban legends. Here are some examples of those myths — and the real story, to set you straight.

Chianti is an inexpensive, commercial wine

Some very fine Chianti wines have always existed, but — in the days of straw-covered flasks — they used to represent a tiny minority of all Chianti. Now the red-checkered-tableclothed tables have turned, and the majority of Chianti wines (at least in major export markets such as the U.S.) are high quality wines. Chianti Classico, the type of Chianti most commonly found outside of Italy, is particularly fine. Prices have risen with the quality, and now you can easily find $25 and $30 bottles of Chianti Classico in good wine shops. Inexpensive, $10 bottles of Chianti do still exist — including some in the nostalgic straw packaging — but the category as a whole has moved uptown.

Italian wines should be enjoyed with Italian food

Any time you drink the wine of a particular wine region with the food of the same region, the combination is apt and harmonious. In the case of Italian food, no wines taste better than Italian wines — even if you drink a lusty wine of the South with a dish that's typical of a northern region. But Italy's wines are so incredibly food-friendly that their pairing talent extends far beyond la cucina italiana. The crisp acidity of Italy's white wines cuts through the richness of classic French dishes, and the tanginess of many reds provides thirst-quenching relief with Tex-Mex. Italian wines are the most food-friendly on earth.

Pinot Grigio is one of Italy's best wines

The average quality of Pinot Grigio wines is . . . well, average. They're dry and refreshing, they don't clash with most foods, and they're perfectly fine if you want an inexpensive wine — but they lack the character and intensity that the French Pinot Gris grape (in Italy, Pinot Grigio) is capable of, and they are not Italy's answer to great white wine. Naturally, a few exceptions exist.

Italy's best wines are all red

An understandable misunderstanding. After all, Italy makes about twice as much red wine as white wine, and most of Italy's most famous wines — Chianti, Barolo, Brunello di Montalcino, and so forth — are red. (In fact, the statement might even have been true 30 years ago.) But certain parts of Italy definitely have what it takes to make fine white wines, and producers in those areas are doing just that. The region of Friuli-Venezia Giulia makes many excellent white wines, as does Alto Adige. Campania has two terrific whites, Fiano di Avellino and Greco di Tufo. Piedmont and Tuscany — the red wine capitals of Italy — even make some fine whites, such as Gavi, Arneis, and Vernaccia di San Gimignano. And some traditional Italian white wines, such as Soave, Verdicchio, and Vermentino, are now better than ever.

The producers of Marsala, Italy's famous fortified wine have tightened production regulations for their wine and upgraded quality. The ridiculous, flavored Marsalas no longer exist, and the top wines — the Vergine and Soleras styles — are now regaining their rightful place among the world's classic aperitif wines. The lower tiers of Marsala might still be more appropriate for cooking than sipping — depending on the brand, the cook, and the sipper — but the category as a whole is more genuine than it has been in recent history, and will probably improve further. (After all, Palermo wasn't built in a day.)

Add a few words to that statement, and it is true: (Inexpensive, mass-market) white Italian wines all taste (pretty much) alike. They're light-bodied, un-oaked, dryish, crisp, and not particularly flavorful. But Italy does have some very distinctive white wines: Tocai Friuliano, Vernaccia di San Gimignano, Gavi, Fiano di Avellino, Moscato d'Asti, Alto Adige Sauvignon, and Vermentino di Gallura, to name a few. Italy also makes some white wines that are manifestly un-Italian in style — oaky Chardonnays, for example. Once you leave the mass-market segment, you can find variety among Italy's whites.

The word spumante means "sparkling" — just that. Because Asti Spumante (the sweet, sparkling wine of Asti) is so famous, however, wineries in California and Italy have borrowed the term spumante for sweet bubblies that imitate Asti, and millions of people now think that the word applies only to sweet, sparkling wines. The connotation of sweetness is so strong, in fact, that Italy's best dry sparkling wines, such as Franciacorta, don't use the word spumante. And you rarely see the word even on bottles of Asti these days, because producers of this classic want to distance themselves from their imitators.

Soave and Valpolicella are low-quality wines

Soave, a white wine, and Valpolicella, a red wine — along with their red companion wine from the Verona area, Bardolino — have received a bad rep in the U.S. and elsewhere. Not that it wasn't somewhat deserved: Many bottles of these wines are mass-produced, unexciting stuff. But all three of these wines can be delightful, if you seek out a good producer, and you are willing to pay a few dollars more than normal. Try a Gini or Pieropan Soave, for example, an Allegrini Valpolicella, or a Guerrieri-Rizzardi Bardolino, and you discover that these wines have character and charm in the hands of a quality-conscious producer.